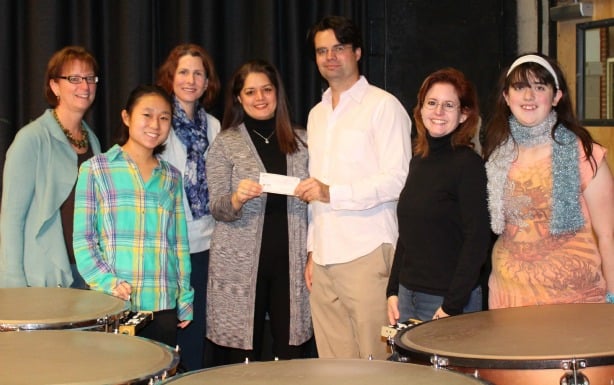 Last Friday, Children Having Learning Differences (CHILD), presented Verona High School Band Director Erik Lynch with a check for $5,000 that will make it possible for the VHS concert band to perform at Carnegie Hall.

Several months ago, the band was invited to appear in March 2013, but needed to raise $12,000 to cover the costs. The band raised a substantial part of that through its usual fundraising efforts but still was short of its goal.

“When we heard that the VHS concert band was invited to perform at Carnegie Hall but were short $10,000, we (CHILD) knew we had to help make this dream come true,” says Norma Francullo, CHILD’s co-chair. “Verona is well known for its music program and therefore we needed to get these kids to Carnegie Hall. CHILD is a not-for-profit organization that has dedicated itself to helping all children reach their potential. The $5,000 we donated will help these musicians reach their potential and we look forward to their performance in March of 2013.”

In accepting the check, Lynch noted that many of the bands Verona competes against are created through audition. The VHS band is open to all students, regardless of initial ability. Lynch acknowledged the generosity of all those who had donated to the Carnegie Hall appearance, including the Verona Mayor’s Charity and Cameco .

“How do you get to Carnegie Hall?,” asks Francullo. “Through the support of organizations, businesses, family and friends from Verona.”