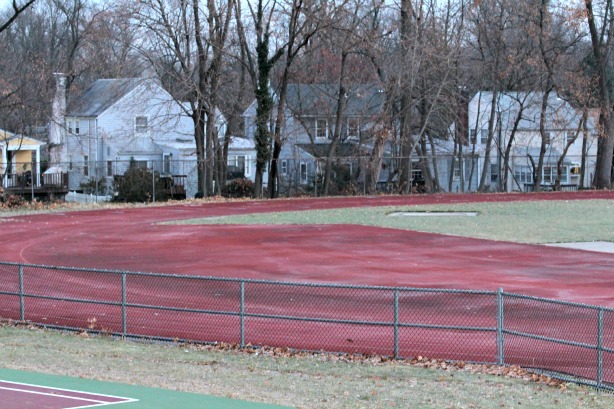 Verona public school sports just can’t get a break this year: The Verona Board of Education announced at Tuesday night’s meeting that it must close the track behind H.B. Whitehorne because part of its surface has separated from the underlying material.

About 100 yards of the track has “delaminated” said BOE member Glenn Elliott, who sits on the Buildings & Grounds Committee. Verona built the track 11 years ago in partnership with Montclair Kimberley Academy.

The closure, which is effective immediately, affects the training of the Verona High School winter track team, though not its competitions, which are all held indoors. Elliott said that VHS Athletic Director Gary Farishian is contacting other schools in our area to see what alternative practice arrangements can be made. The track will also be closed to the general public and to all Recreation Department programs. The BOE said it will keep open the field in the center of the track, which is used for sports like lacrosse and soccer, and gym classes at HBW.

Elliott estimated that it will cost between $70,000 and $140,000 to rebuild the track. While that cost would likely be shared with MKA, work could not begin until the spring.

The BOE has been aware for some time of several issues related to the condition of the track, which has been resurfaced twice since it was installed. But the latest problem comes on top of two holes that have closed the VHS football field and prompted the board to put perhaps as much as $4 million in sports field work onto its $9.1 million to-do list for school facility repairs. The board said at Tuesday’s meeting that we could be facing a referendum for repair spending next year.