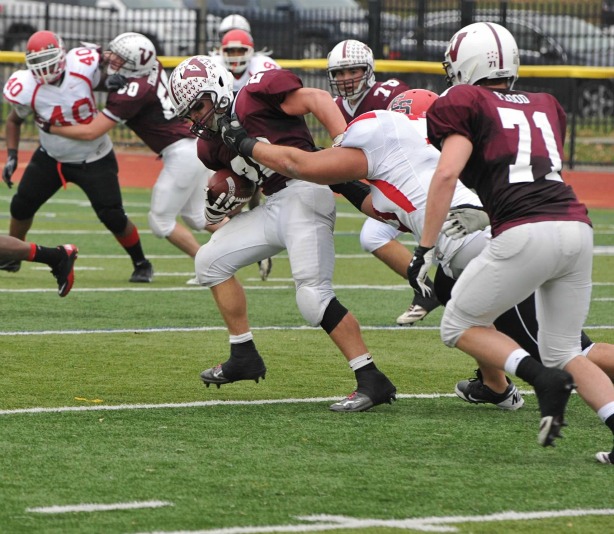 The Verona Hillbillies football team notched a 40-6 win on Saturday over the Red Raiders of Newark’s East Side High School.

The Hillbillies struck early when senior Dean DeNicola scooped up a fumble and raced across the goal line to put the Hillbillies up 6-0. Alex Kaslander’s extra point made it 7-0. The Hillbillies got the ball back three plays later when Matt McKeown picked off a Red Raider pass.

Sophomore QB Frank Ferrari connected with sibling TE Billy Ferrari, to bring the ball down to the five yard line before Frankie Greco scored on a dive. Greco also scored the Hillbillies next touchdown but an errant snap on the extra point made the score 20-0. After a Mckeown’s second interception of the game , Ferrari hit senior Michael Harrington on a 45 yard touchdown strike. Before the half, sophomore Matt Intilli sacked the Eastside QB for a 20 yard loss and causing the Red Raiders to punt. With seconds ticking down in the first half McKeown raced seven yards to make it a 33-0 halftime lead.

The Hillbillies struck gain in the second half when senior DL Chris Guida’s sack threw Eastside for a 30-yard loss. A few plays later Alkadair Ports barreled threw the tough Verona defense and raced 67 yards for the Red Raiders only TD of the afternoon to make it 33-8.

Attempting to get back into the game, Eastsides onside kick failed when it was recovered by Verona freshman Dave Gautieri. With sophomore Chris Bujnowski commanding the Hillbilly offense, Verona mounted another drive when freshman RB Brian Valentine’s 20-yard gain put the Maroon and White in scoring position. Bujnowski then hit Luke Connell to make it 39-8.

The Verona defense in the second half was led by senior DL Francis Galbaldon as they stopped the Raiders next drive. With freshman Nick DeVivo at QB, the Hillbillies starting to drive to again but the clock wound down giving Verona their fifth win of the season against three losses and a sixth seed in the North Jersey Group 1 NJSIAA playoffs. The Hillbillies travel to Pompton Lakes for the opening round against the 8-0 Cardinals.