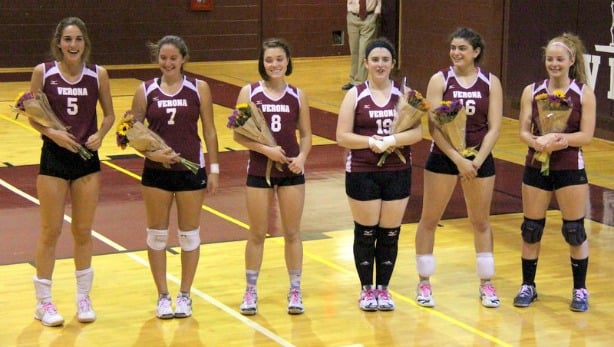 On a memorable afternoon the Hillbillies volleyball team honored their six seniors en route to their eighth win of the season over Newark’s University High School. Starting seniors Olivia Lewis, and Olivia Newkirk , Catherine Aracil, Krysta Tischio, Amanda Langan and Casie Milmoe held off the Phoenix’ scoring run to hold onto a 25-23 win in the first game.

The Hillbillies took the second game 25-18 to complete the match sweep. Langan, playing middle hitter, a position she played all last season before being moved outside, had a notably productive game. Coach Dowd said Langan “adjusted beautifully and took control” and led the team with five kills. “There was a lot of great energy from all the players,” added Dowd. “There was a very positive feeling throughout the entire match. Our serving saved the day.”

The seniors combined for fifteen aces. Milmoe, Aracil, Tischio, Newkirk, Lewis and junior Eliza Sniatkowski all chipped in with kills. The win edges the volleyball team’s record toward the .500 mark at 8-9.

The Verona boys’ soccer team captured their sixth win on the season last night at Centennial Field against the Knights of Irvington High School. Junior Matt Braschi scored all three goals and senior goalie Mike King and Verona defense gave up just one goal in the match. With the 3-1 victory, the boys’ soccer team record stands at 6-9-1. 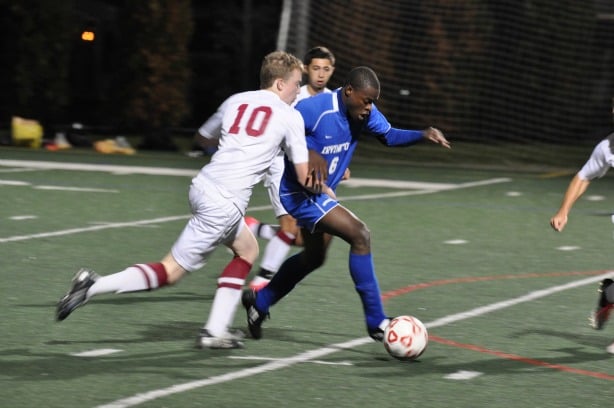 The Governor Livingston Highlanders (12-5) jumped out to a quick lead scoring in the opening minutes of the girls soccer match and never looked back as they defeated the Hillbillies 2-0 yesterday in Berkley Heights. The loss drops the Maroon and White’s record to 9-5-1.