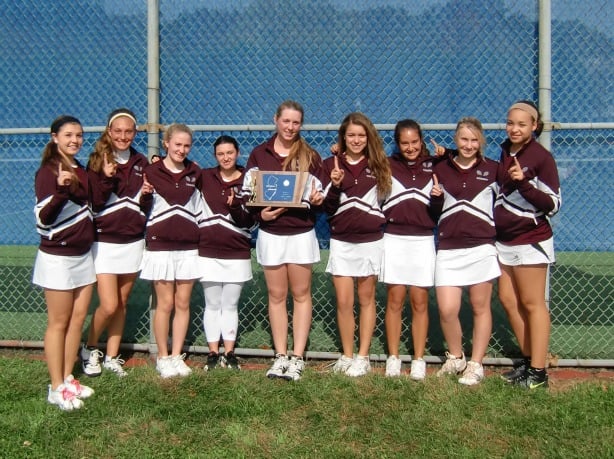 “It is wonderful,” said Coach Patricia Schoenig of the victory, noting that the VHS girls last won a Group 1 title in 2006. “Very few students go through high school able to say that they were group champions in any sport.”

It was a 5-0 victory for Verona over Park Ridge. In first singles, senior Jackie Noyes uncharacteristically dropped her first set to Karolina Golabek 5-7, before rallying 6-4, 6-0 to take the match. In second singles, Ciarra Davison dispatched Deborah Kim 6-1, 6-4. Allie Vaccaro, a sophomore, took on Kat Chemakin in third singles and took her sets 7-6, 7-5.

Schoenig noted that Group 1 schools in Essex County have many powerful teams–Newark Academy, Millburn, Livingston and MKA–where students have been involved in tennis for a very long time. That’s not typically the case in Verona. Noyes, for example, was a soccer player before finally embracing tennis. “Our initial goal was to do well when we were competing with our peers and get to sectionals”, said Schoenig of her young team, which includes only three seniors. “They were getting better and better as the weeks went on and I did think that we could be in the finals.”

And still, she was cautious: “Park Ridge was an undefeated team going into the match and we really didn’t know where their talent was,” Schoenig added. “I am really proud of the entire group for the win.”

“We had a great performance by Ciarra at second singles and the doubles teams placing the win in our hands,” said Schoenig. “After knowing that it would have been easy for Jackie and Allie to save their energies and not compete, they showed great character and tenacity to finish the match and have the 2012 Varsity Team finish with a score of 5-0 against an undefeated opponent.”

Unfortunately, the momentum of the Park Ridge victory didn’t carry to Wednesday, when Verona had to immediately take on Glen Rige for the North 1 semifinals. Noyes defeated Kim Baione 6-2, 6-4 and the first doubles team of Chivily/Tedesco had a draw with Maddie Baione/Erin Carr. But Verona, which had lost to Glen Ridge earlier in the season, came up empty handed in its other match-ups. The girls ended the season with an 8-9-0 record.

In other sports news, the girls soccer team battled the Newark Academy Minutemen to a 1-1 tie Monday in Livingston. Down 1-0 in the second half, Olivia Marino scored the equalizer. Marino’s goal sent the Hillbillies and Minutemen into double OT where neither team was able to take home a win. The girls soccer team record stands at 9-4-1.