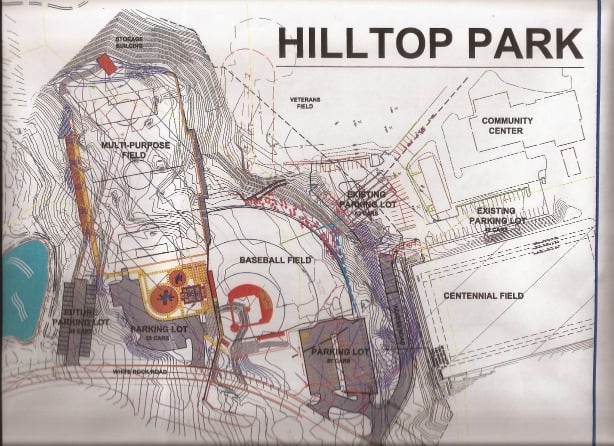 The development of Verona’s Hilltop into a central recreation spot has been a work in progress for more than a decade. But at a Town Council workshop last night, the next phase of the plan–two new sports fields and an outdoor amphitheater–took a big step closer to becoming reality. Verona Township Manager Joe Martin said he would introduce an ordinance to proceed with Phase II of the Hilltop Master Plan in January. If approved by the Town Council, work could begin next spring and the fields could be playable by the fall of 2014.

First, some basics. The site for all this work is an area that encompasses the Verona Community Center and the existing Veterans’ and Centennial sports fields. Totaling 22.3 acres in size–or almost half the size of Verona Park, it was cobbled together from land owned by Verona and property that once belonged to Essex County. It stretches from Bloomfield Avenue and Linn Drive to the edge of the new luxury rental complex on the Hilltop’s Crest, and likely will be funded with revenue being earned from that development.

The town has been working on Phase II since 2005, seeking input and buy-in from all the youth sports groups in town. As a result, the two planned fields will be able to accomodate everything from baseball to football, lacrosse and soccer, from kindergarten all the way up to high school. The baseball field could allow the Verona High School softball team, which now plays on a scrubby field behind F.N. Brown elementary school, to hold night games on turf.  Parking at the recreation complex would be doubled to 366 spaces or more from its current 186 spots.

Tuesday night’s workshop covered what might be the final revisions to the plan. The rectangular field was expanded to full football field dimensions and the baseball area was reconfigured so that a 70 by 50-foot youth soccer field could be placed in the outfield. The complex would also include a 150-seat outdoor amphitheater that could be used for music events, environmental education and other programs. It will be just to the south of what is now known as Prisoner’s Pond, a small body of water that once supplied ice to the former county penitentiary that sat on the Hilltop’s North Caldwell side.

The cost of Phase II was not discussed at the workshop; Martin said a budget would be given to the Council in December before the ordinance for bond funding is introduced. He stressed, however, that the buildout “will not rely on any property tax dollars. It will rely on the revenue stream from the Hilltop for debt service.” This would be similar to what happened in 2006, when Centennial Field was funded in a deal with the developer of the Hilltop properties.

After the workshop, Martin said the annual debt service on Phase II could be $250,000 to $350,000, which would be about one-third of the revenue that the Hilltop residential development will generate from the town when completed. The levies on the two buildings were structured as a PILOT, or payment in lieu of taxes, which means that Verona’s municipal government keeps the bulk of the money. (The PILOT monies have become something of a thorn lately in relations between the town and the Board of Education, which is having its own field troubles.)

Now come the “ifs”: If the construction budget and funding stream make sense to the Council, work on the site could begin in March or April of 2013. Martin said an 18-month construction schedule is “reasonable”, which would mean playable fields in the fall of 2014. The amphitheater may take longer because the site was used as a pistol range by Essex County and there are what Martin termed “environmental issues” on the site. If it can be cleaned up in a cooperative fashion, construction there would be about 12 months.

And there’s an “if” that might further rattle opponents to the mixed-use development near Everett Field on the east side of town: If Verona builds the Phase II fields, some amount of blasting will also be needed at the Hilltop site.