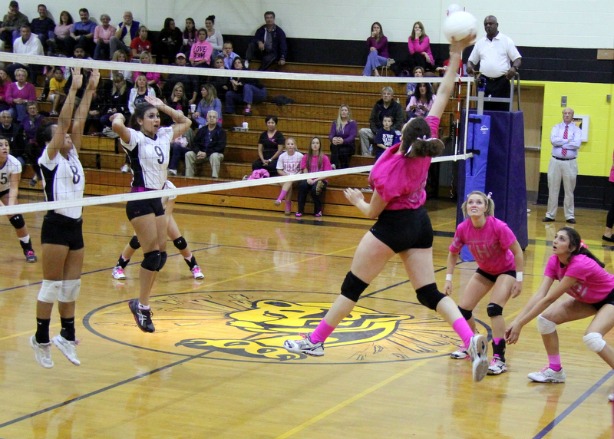 The Verona Hillbillies traveled to Cedar Grove to take on the Panthers in the Dig Pink Classic to benefit the Side-Out Foundation and breast cancer awareness. The Hillbillies wore hand-made pink uniforms for the event and the home team had a silent auction and bake sale to raise funds for the cause.

After falling in the first set 25-15, the Hillbillies came out battling in the second. Ellen DiDia started the Hillbillies off quickly to take a 1-0 lead. The teams battled back and forth and the Panthers took a 10-8  lead before Krysta Tischio and Nikita Joshi  blocked a series Panther kills to tie the game at 10. Catherine Aracil’s ace and another block by Joshi along with Madison Misuro’s shot that the Panthers returned out of bounds put Verona up 13-11. 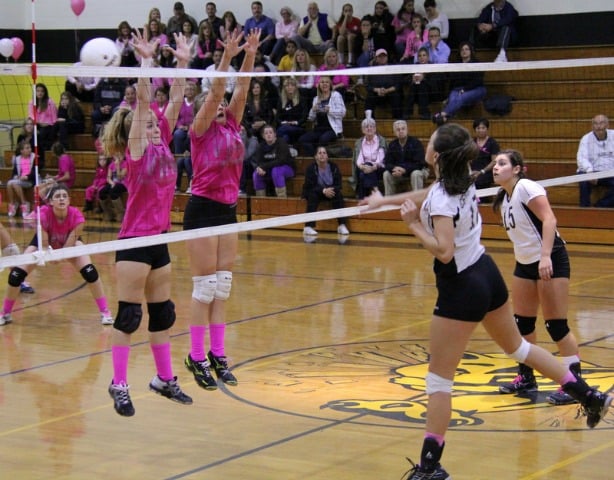 The Panthers came roaring back to go ahead 16-14. When Verona got the ball back, Eliza Sniatkowski served three aces and Amanda Langan had a kill to put Verona up 18-16. Casie Milmoe’s kill made it 20-17; DiDia’s ace and Jessica Parsons’ kill put the Hillbillies up 22-18 before the Panthers called a time out.  The teams played a series of long rallies that the Hillbillies just couldn’t capitalize on.

With Verona clinging to a 22-21 lead, Coach Mollie Dowd called a time out in an attempt to regroup and break the Panthers momentum. However, on this night in front of a jam-packed spirited student section and fans the Panthers weren’t letting down and pulled out an exciting 25-22 win. The loss evens the season series with the Panthers and put the volleyball team’s record at 7-7. 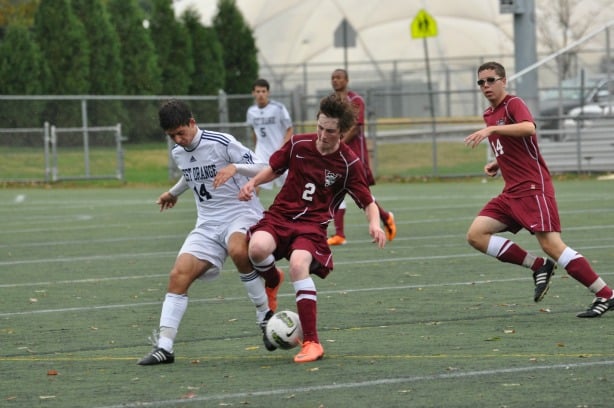 The girl’s soccer team got a boost from the goal tending of Diana Flores and toppled MKA 3-1 in the first round of the Essex County Tournament on Monday. After a scoreless first half, Claire Fitzpatrick, Olivia Marino and Jill Sprong goals for the Hillbillies. In a Sunday game that had been postponed from Friday, the boys soccer team fell 3-1 to West Orange. Troy Carrington had the lone goal for Verona, whose record now stands at 5-6.

Tuesday action in Hillbilly Country has the boys soccer team home against Newark Academy. The tennis team is home in the NJSIAA Tournament and the cross country teams are at Branch Brook Park.