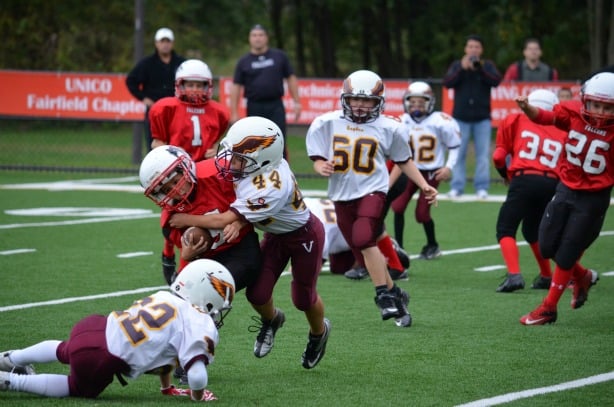 Four games into the 2012 season, the Verona Eagles A-Team is still looking for their first test. After thrashing the Fairfield Falcons 30-6, the Eagles record stands at 4-0, outscoring their opponents over those four games 126-22! That first test of the season should come in the next three weeks, as Caldwell, Hanover Park, and West Essex have a combined record of 10-2.

On Fairfield’s opening possession it was clear that the game announcer would be saying the name Chris Aldiero often. Though he struggled with the pronunciation, he would get a lot of practice before the night was over. Aldo, as he is known in Verona, would be in the backfield on the first series, along with Matt Gautieri, Steven Priscoe and Mike Mughetto to force a punt. 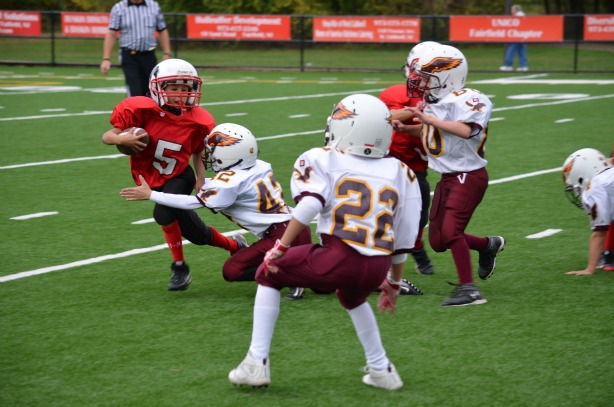 The night only got worse for the announcer when Jake “Hoot” Houthuysen dashed 51 yards through the right side of the line for the game’s first score. Colin “Slappy” Kiernan kicked the extra points, and it was quickly 8-0 Eagles.

Following another punt, the Eagles were in business again. Quarterback Zach Zaccone scrambled for an eight-yard gain and was hit out of bounds following the run. “Mugsy” Mughetto would follow with a tough 15-yard run of his own, moving the ball down to the Falcon 15 yard line. From there Zaccone would throw to Kiernan, who would follow a beautiful block by Matt Zaccone into the end zone. Kiernan’s kick would make it 16-0 Eagles.

On the next possession, Aldo would again make two plays in the backfield for losses of 4 and 6 yards, forcing yet another Falcon punt.

Mike Stanisci would get in the act, catching a pass down to the 3 yard line. Hoot bolted into the end zone on the next play and the rout was on. Kiernan once again added the extra points and it was 24-0 Eagles.

The Eagles would add their 4th and final touchdown on Mughetto’s 60-yard run around the left side. The extra point run was stopped and the score stood at 30-0.

The Falcons would add a late score to make the final margin 30-6.

Coach Steve Lupo knows that his team’s true tests will come in the next three weeks, but has to be happy with the way they have played so far. The Eagles will take on the Caldwell Chiefs this Saturday night at Centennial Field in a rare home night game. Come out and watch the Eagles try to improve their record to 5-0! 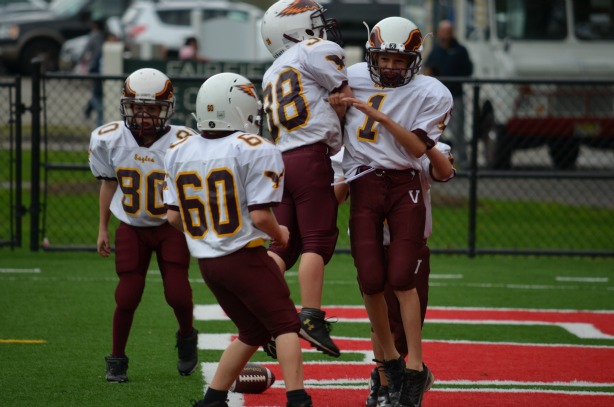 There is nothing like a football game on a crisp, fall day. With yet another game on the road, the Verona Eagles C Varsity team, Head Coach Bob DiTrani and staff had their sights set on another win. They did just that.

Soon after the opening kickoff, Pierce Coppola scored the first touchdown of the night with a quick quarterback sneak right up the middle giving the Eagles a six-point lead over the Fairfield Falcons. Fairfield offense struggled most of the game against the Eagles’ solid defense, but the constant pressure and key tackles by Michael Matarazzo, Jack Lonsinger and a flock of Eagles caused multiple turnovers. The first fumble was recovered by #42 Eagle, Ryan Hajtovik. This would be his first of two fumble recoveries in the half. The Eagles are quickly marching their way down the field and rapidly gaining yards with every down. 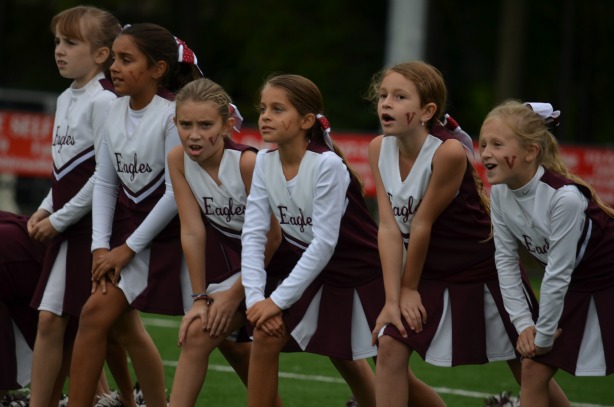 Even when the Falcons took advantage of a rare turnover by the Eagles, they were once again stopped at the 24 yard line by a strong tackle from #60, Zachary Bucher.

Shaken by the pressure of the Eagles potent defense, the Falcons fumble the ball, once again to be recovered by Hajtovik. Verona Eagles back on offense with the ball gaining more yards, in fact, a 10-yard carry by #38, Frankie Riggio, which will get the Eagles a first down.

As the seconds tick off the clock, Eagles aiming for six more, a pass was intercepted by Fairfield but the Falcon player steps out of bounds and is then taken down hard by Hajtovik just in time for the half.

In the opening of the second half, the Falcons kick off was returned by, #80, Thomas Radigan. The Eagles now find themselves in very good field position and it is not long before they seal the deal. Riggio makes a 25-yard run into the end zone for six more. Defense has to hold strong for the remainder of the game and they do nothing short of that. We left the field victorious with a shut out win over Fairfield, 14-0. Eagles are flying high with a record of 4-0.

As I’ve already stated, there truly is nothing like a football game on beautiful fall day. It’s even sweeter when you play on your own home field. The Verona Eagles C Varsity team will prepare for the next battle to be fought on Centennial Field against Caldwell this weekend. “Welcome Home Eagles!” 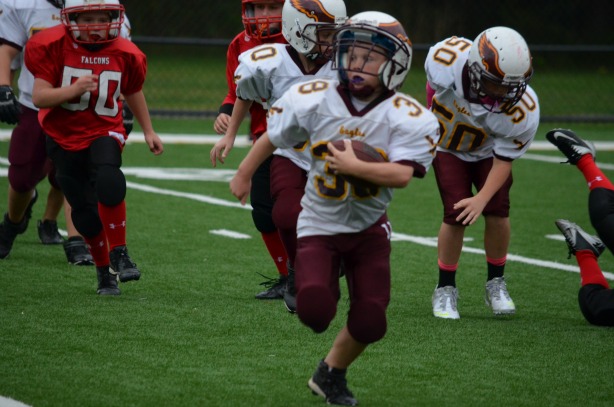