All three Verona Eagles teams squared off against Livingston counterparts this past weekend, and all three came up victorious. Here are the recaps from Dave Gautieri and Mark Riggio. Dawn Scott Mulligan provided the photos of the C Team and its cheerleaders in action. 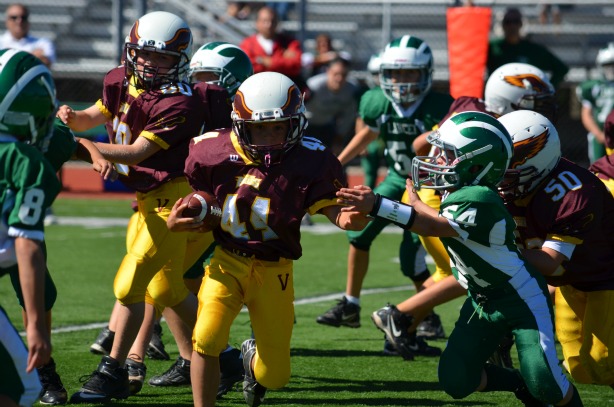 Coach Steve Lupo’s A Team moved their record to 3-0 with a dominant 31-0 victory against the over-matched Livingston Jr. Lancers.

On the Lancers’ first possession, they attempted a fake punt on 4th down, and CJ Lavery was there to make the tackle short of the first down.

Jake “Hoot” Houthysen took a handoff and bolted through a huge hole between Chris Aldiero and Matt Gautieri, rushing 20 yards down to the 4 yard line. Zach Zaccone dropped back to pass, but alertly saw a huge opening in the Lancer D, so he tucked the ball away and ran untouched into the end zone. Mr. Reliable, Colin Kiernan, booted the extra points and the Eagles lead was 8-0.

On the next Lancer possession, Aldiero hurried the quarterback’s throw, which was picked off by Zaccone at the 48-yard line of the Eagles with 4 minutes left in the first quarter.

Mike “Mugsy” Mughetto raced 26 yards to the Lancer 29-yard line. Zach and Matt Zaccone would then hook up on a 18-yard slant pass down to the 11. Zach Zaccone then scrambled his way into the end zone for his second TD of the afternoon. Slappy Kiernan again drilled the extra points and it was 16-0 Eagles at the half.

Early in the second half, Hoot would take off on a 65-yard jaunt down to the Lancer 13 yard line. From there it would be Zach Zaccone firing a pass to a wide open Mike Stanisci who scored the Eagle’s third touchdown of the day. Kiernan’s kick made it 24-0.

Much credit to the Eagles offense goes to the offensive line: Billy Fauerbach, Austin Camp, Andrew Luehs, Chris Aldiero, Matt Gautieri and Mike Stanisci. They worked hard all afternoon to open holes in the Lancer D.

Still, the Eagles weren’t done scoring. This time it would be Lavery who would hook up with Ricky Friedman on a touchdown pass and a commanding lead. The point-after was run in by Sean Ryan and the Eagles lead was 31-0, which would be the final score.

On Saturday night the Eagles travel to Fairfield to face the winless Falcons. Come out and watch a truly talented group of football players try to move to 4-0! 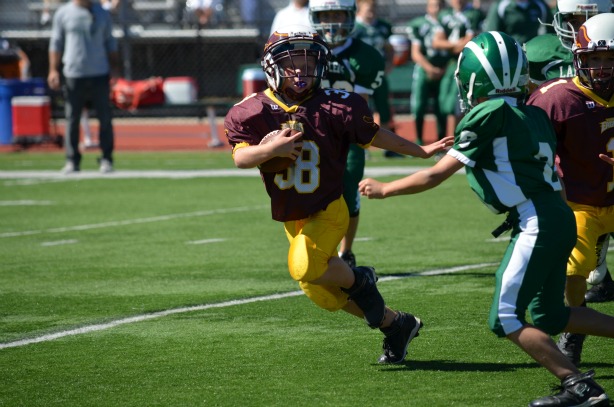 The Verona Eagles B Team defeated the Livingston Jr. Lancers 16-0, in a battle of two undefeated teams. Coming off two straight nail-biting come-from-behind wins, Coach Ed Shields was hoping for an easy win. Though it was far from easy, his Eagles never trailed.

Livingston took the opening kick-off and drove to the Eagles 17-yard line before the Eagle D stiffened. PJ Jordan, Nick Gonzalez, and Brian Hipp all assisted on tackles. On 4th down, Jack Gautieri forced the Lancer runner back inside and Brandon Cariani was there to level him.

The Eagles moved the ball well, but were unable to score on their first two drives. Quarterback Tom Sharkey, and backs Nick Riggio and Matt Frungillo each had some electrifying runs, including a 35 yarder by Shark. However it appeared the half would end scoreless as the Eagles had the ball on their own 48 with 26 seconds to play.

Offensive coordinator Rob Frungillo knew just what to call, a sluggo to Rig. A sluggo is a slant and go. Sharkey gave a pump fake and the defensive back bit on it. He hit Riggio in stride and the Eagles grabbed the lead on the final play of the half. Shark would also pass to Matt Frung for the two-point conversion and it was 8-0 at the half.

The Lancers kicked deep to open the second half and Zander Zebrowski caught it and raced 20 yards to set the offense up at midfield. The offense stalled and was forced to punt. Pat Haughney uncorked a booming kick that pinned Livingston deep in their own end.

On 3rd down, Gautieri and Matt Aldiero met at the quarterback just as he was attempting to deliver the ball. His pass floated and Anthony Zamloot intercepted it at the Lancer 33-yard line.

From there Riggio took a pitch and ran 15 yards down to the 18. Sharkey then hit Frungillo on a slant pass to the 3. From there, Shark followed a trap block into the end zone. The two-point conversion was run in by Sharkey and the Eagles’ lead was 16-0. The game was put on ice when PJ Jordan came up with a fumble recovery.

There will be a showdown Saturday night in Fairfield, when the last two undefeated B-League teams square off. Coach Shields will have his young Eagles squad ready for the Falcons. 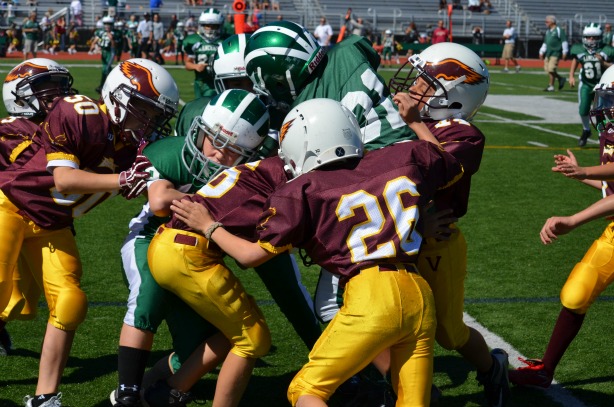 The Verona Eagles C Team lead by Coach Bob DiTrani had their toughest test of the early season with a 12-6 victory over the Livingston Lancers. The Eagles stared on defense after a good opening kickoff by Quinn Zebrowski the defense came ready to play with some good early hits by Steven Tafuri and Mike Matarazzo and on the fourth play of the drive Jake Milmoe recovered a fumble on the Verona 46-yard line.

Verona offense took over with five straight running plays before QB Pierce Coppola threw a 10-yard play action pass to TE Steven Petro for another first down. The offense then turned the ball over after a fumble and The Lancers took over on their own 26-yard line. After two plays, Milmoe recovered another fumble on the Lancers 21-yard line. Frankie Riggio started the second quarter with 2 hard runs setting up Coppola with another play action pass to Petro resulting in a Verona TD but the extra point attempt was no good.

After another good kick off by Zebrowski the Lancers started with the ball on their own 35-yard line but the Eagles defense had a breakdown and allowed a 65-yard TD run to tie the game but stopped the extra point attempt. Verona got the ball back on the 37-yard line after Livingston kicked the ball out of bounds and began pounding the ball behind the blocking of Radigan, Milmoe, Bucher, Seawright, Zerin and Nippes with runs from Riggio and Coppola that set up a 15-yard pass to Bucher for a first down on the Livingston 24. After a face mask penalty and a few more runs, Riggio scored a 6-yard TD but the extra point attempt failed to make the score 12-6. Livingston got the ball back before the end of the half but after a 6 yard tackle for a loss by Matarazzo and a sack by Al Lombardi the defense held the score 12-6 going into halftime.

Livingston started the third quarter with an onside kick attempt but Zack Bucher recovered the ball on the 50-yard line. Verona started running the ball and on 3rd & 4 Coppola drew the Lancers off sides to continue the drive. The Eagles moved the ball down to the 25-yard line before turning the ball over on downs. After a few short runs, Zebrowski made a great open field tackle and the following play LB Jack Lonsinger tackle behind the line of scrimmage ended the third quarter.

Verona started the fourth quarter with an off sides penalty and on 4th down and short Bucher shot into the backfield and made a tremendous tackle getting Verona the ball back. Verona had no success on offense and Livingston got the ball back on the Verona 45 yard line. After some big hits by Hajtovik and Milmoe to stop their running game Livingston completed 2 pass plays down to the Verona 15 yard line but LB Mack Gresham and DE Steven Tafuri had more big tackles and after a holding penalty by Livingston, Mack made the tackle on 3rd down and Riggio made the tackle on the sidelines on 4th down to stop the Lancers’ drive. 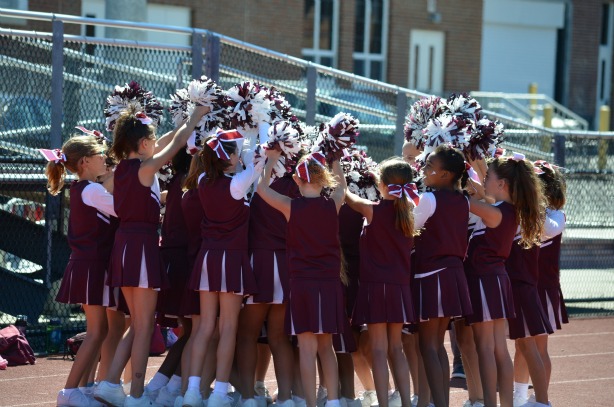