Dramatic Last-Second Win For The Hillbillies 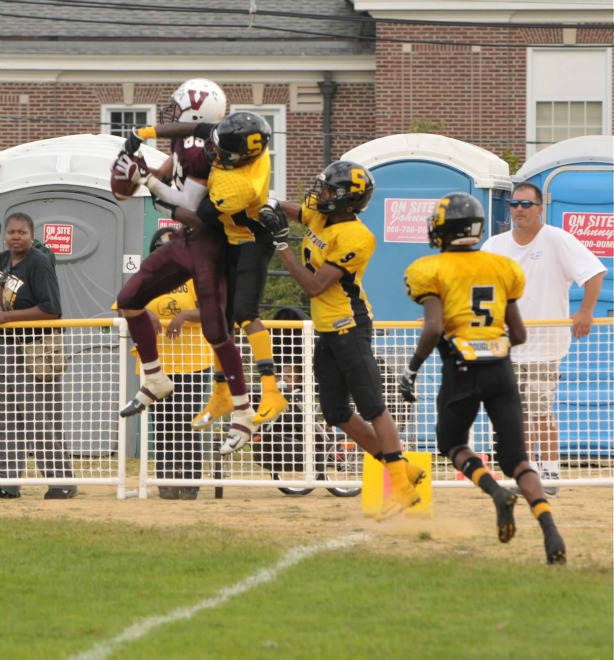 In another thriller, the Hillbillies pulled out a 21-20 victory over Shabazz High School in the final seconds Saturday at Doc Goeltz Field.

On the opening drive, the ‘billies marched 60 yards down field before QB Frank Ferrari followed blocks by Ryan Flood and Sam Cummings to take a 6-0 lead. Alex Kaslander’s kick made it 7-0. The Hillbillies and Matt McKeown’s tackle stopped the Bulldogs deep on the ensuing kickoff. The tough Verona defense, which would be tested all game, stopped Shabazz on a four and out and took the ball over on downs.

Verona easily made their way down field before Ferarri hit TE Luke Sniatkowski on a 15-yard drag pass, putting them on the 12 yard line. From there it was all RB Frankie Greco as he followed lineman Joe Cordasco and Luke Weiss’ blocks and pounded his way to another Verona TD and a 13-0 lead. The kick made it 14-0.

For Shabazz, a team loaded with talent and one of the top smaller school teams in North Jersey, it was time to make an adjustment. They stepped it up on defense and the momentum of the game changed drastically in their favor. QB Juwan Jackson ran the ball in for a TD right before half time to make 14-6.

As the second half began, Shabazz stopped the Verona offense, causing the Hillbilly defense to have to defend their goal in unfavorable field position. DB Alex Dellavalle particularly saw nonstop action as Shabazz went his way almost every time. However, Dellavalle and LB Mike Perri continually forced them inside or were able to make the stop.

Verona caught a break when Junior Tyler Bruso recovered a fumble, giving Verona the ball again deep in their territory. Once again unable to execute on offense, the Hillbillies turned the ball over on downs enabling Jackson to run the ball in and knot the game at 14. Jackson then hit Kenneth Prioleu on a 30-yard pass to take a 20-14 lead.

With 1:40 left and Shabazz with the ball there seemed to be little hope for the Maroon and White. However, Verona caught a break when Shabazz was trying to run down the clock run and Jackson, running right, was pushed out of bounds, stopping the clock. With the game on the line on 4th down and 1 yard to go Quinn Cummings and Peri stopped the Shabazz run, giving Verona the ball with 38 seconds and what seemed to be a mile to go.

As some fans began to exit the park, Ferarri hit Michael Harrington on a long pass down the middle, setting up one last play. With just three seconds left Coach Racioppe sent his receivers deep into the end zone and Ferrari launched a bomb high into the air with one last chance of a miracle.

And on the beautiful first day of fall a miracle did happen. Harrington out-jumped three Shabazz defenders to pull the ball down and fall into the end zone to tie the game. As the crowd erupted into frenzy, Kaslander put the ball through the uprights to give the Hillbillies their second consecutive victory in the final seconds of the game.