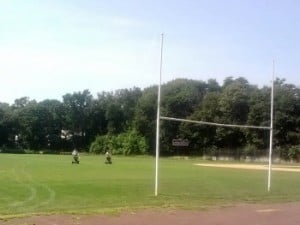 The Verona public schools have posted a notice on their Web site that highly toxic pesticides are being applied to the field at H.B. Whitehorne Middle School and the fields at Verona High School today. The pesticide pellets have also been applied in front of the Verona Public Library, although there is no notice about that application on the town’s Web site. Verona Township Manager Joe Martin had promised 24-hour advance notice of pesticide applications at a Town Council meeting earlier this year. The pesticides were applied by TruGreen, even though that company’s landscape contract with Verona was supposedly put on hold in May.

The school Web site notice appears to have been posted only this morning, Saturday September 1, even though the underlying notice from TruGreen was sent to the district several days ago. The TruGreen PDF notice was time stamped Aug. 27 at 12:05 p.m. and again on Aug. 30 at 12:59 p.m. The school did not use its GlobalConnect telephone messaging system to alert parents.

Pesticide signs have been posted on the inner track oval at HBW and on both the lower and upper fields at VHS. The upper field, also known as Thomas J. Sellitto field, has been closed to football practices since a large hole opened on it 10 days ago. The Board of Education needs to bring in ground-penetrating radar to assess the condition of that field, but has said that it might not be available for the Hillbilly home opener on September 22.

The school note indicates that the treatment is an IPM, or integrated pest management, process. IPM is supposed to be pesticide-free landscape care. But the notice indicates that a pesticide is being used on the two school fields, TruPower3, which the U.S. Environmental Protection Agency rates as toxicity level I. That is the agency’s highest toxicity rating.

This is not the same chemical that was used on the Linn Drive playing fields in May. The May 8 incident prompted a wide-ranging discussion of pesticide use on town and school fields within both the Town Council and BOE.

The school Web site note directs calls about the pesticide use to the district’s director of facilities, Paul McDevitt. This reporter’s call to that number, which is a landline, has not been returned. An email to Verona Superintendent Steven A. Forte and BOE President John Quattrocchi has not been returned. UPDATE: Verona Schools Superintendent Steve A. Forte sent an email late this afternoon to say that the notice about the pesticide application at the school field was posted to the schools’ Web site on Aug. 30 at 4:00 p.m. and that signs were put on the fields.

Martin also said that he has proposed to the Town Council a way of trying out organic care at some town and school fields, even though, as he told the Council last month, his observation of an organically maintained field in Bergen County was “disappointing at best.” Martin said that he has recommended Everett Field as a test location.

Town Council member Kevin Ryan, who is the council’s liaison to the Verona Environmental Commission, observed the pesticide application at the VHS lower field this morning. He said that he intended to ask, at Tuesday’s council meeting, why the promised notification policy had not been followed.

The fields are ostensibly closed for use today, September 1, even though this reporter observed an open gate at the upper VHS field; the HBW field has no lockable gate at the Gould Street entrance. The fields are to be usable again tomorrow.