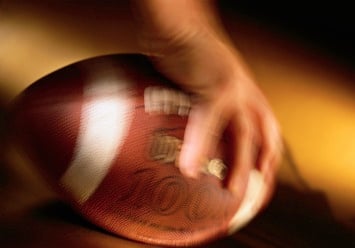 Last week, during football practice, a hole opened up near the “home ” side of the field that may have been an old well shaft. The 15-foot-deep hole was almost immediately filled with gravel and capped, but the Verona Board of Education disclosed at Tuesday night’s meeting that it now intends to bring in ground-penetrating radar to see what else lurks beneath the field’s surface. What it finds could have repercussions for the football program and for a marching band festival that is the chief source of income for the Verona music program.

VHS and the upper football field were the site of a large orphanage from 1873 to 1900, the Newark City Home. The BOE seems to think the well, which ended in what Board President John Quattrocchi said was “some sort of underground structure”, may have dated from that era. “We don’t know what its purpose was,” he added of the underground structure. Glenn Elliott, who serves on the BOE’s Buildings  & Grounds Committee, said that the engineering firm that handles the radar work will also try to see if any plans from the Newark City Home still exist in county archives.

The BOE said its goal is to find out, as quickly as possible, what else is underground and whether additional problems might develop. The eastern side of the field, where visitors sit, was built on what Elliott characterized as “poor quality” landfill. In 2002, a sinkhole formed in the endzone during a football game with Immaculate Conception High School. The game had to be stopped, and the rest of VHS’ home games had to be played at Linn Drive that season. Depending on what the radar uncovers, the BOE may need to order soil sample tests and  come up with a remediation plan.

And it may need to move some of the activities now scheduled for Sellitto Field. Quattrocchi said after the meeting that “we will likely need to move the home opener”. But he stressed that no decision has yet been made on the game against Shabazz High School, which has a 1 p.m. start, or any of the other field uses. The Verona Music Parents Association has booked the field for its October 6 Festival of Bands, a competition among 12 marching bands that is the VMPA’s key fundraiser for the year. “The last thing we want to do is put these programs in jeopardy,” Quattrocchi said during the meeting. “If we move things to Centennial (Verona’s turf field), it has a knock-on effect for the youth sports programs in town.”