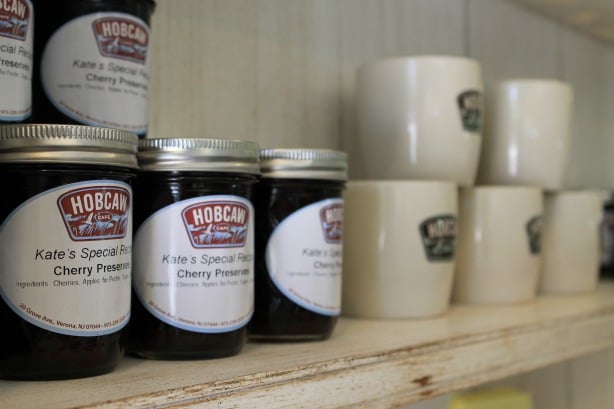 If you’ve been in to Hobcaw this summer, you may have noticed Kate’s Special Preserves adorning the shelves. The creativity behind these jams, jellies, and preserves belongs to Kate Crepezzi, a Verona resident for the past two years who moved here with her husband as a result of his new job. Although Verona is relatively new to Crepezzi, canning is not. Crepezzi has always canned for friends and family, and in early June she joined the Hobcaw kitchen team cooking up her preserves using fruits in season.

Originally from Forked River, N.J., Crepezzi grew up surrounded by farms and learned about canning and preserving the same way generations worth of others have—countless childhood hours in the kitchen with her grandmother and aunts.  When the local farms had a surplus of fruits and vegetables, the women in her family went to work canning. Crepezzi says that canning became an “old-fashioned get together” and even though she doesn’t have the host of women in her kitchen that she did growing up, Crepezzi is still canning regularly at home as well as at Hobcaw.

Not easily intimidated by fresh produce, Crepezzi says she’ll “put anything in a jar,”  but her favorite creations are fruit butters: apple, pumpkin, sweet potato and lemon; some of which she plans to make for Hobcaw in the fall. With so much canning experience and years of “putting up foods” one might wonder if there is anything she hasn’t tried yet. When asked, she mentioned the root vegetable kohlrabi.

Crepezzi doesn’t just make preserved items for Hobcaw. Much of the food that she “puts up” during her home canning time are for her friends and family. Typically, this involves working with a master recipe and making necessary changes to fit specific tastes and needs. For example, Crepezzi makes, and preserves, a nut- free spinach pesto for a friend with multiple food allergies. Involving only vegetables, olive oil, salt, pepper, and garlic, she’s able to control the ingredients and make food with a year-long shelf life.

Crepezzi has visions beyond her own kitchen and Verona though. With a bachelors of science degree in nutrition and food service from Arizona State University, she has an ultimate goal of starting a preserving company (similar to Stonewall Kitchen) and working through her own adaptations of standard canning and preserving recipes. Crepezzi has a passion for preserving foods that is evident in both her enthusiasm and her well stocked cabinets. Her  favorite part of canning is that she loves “having food available just in case you need it.”

For a personal sampling of Kate’s Special Preserves, there are several flavors available at Hobcaw, with more to come based on fruit that’s in season. Currently on the shelves are: blueberry, strawberry, peach, cherry and orange marmalade, which cost $6 each.