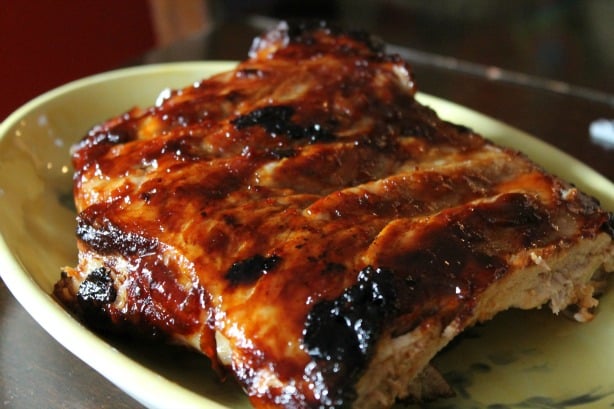 I love spareribs, but I don’t know how to use my grill. Additionally, I think grilling with kids around is very difficult, and dangerous, so even if  I knew how to turn it on, I don’t think I would if I had to cook on it with the kids around. However, I do love ribs. I’ve made them before in my Crock-Pot and while that is an easy recipe and very hands-off, I wanted to try baking them rather than braising them. In summer, this does give more of a grilled flavor and texture.  Also, by quickly boiling the ribs first and then baking them, much of the fat is removed before cooking. This just feels healthier.

And so, if you’re looking for a way to make ribs indoors here’s a toddler friendly recipe that requires almost no time at the stove but tastes like you’ve been hard at work at the grill.

Cut your slab of ribs in half.

Boil a large pot of water. You’ll want something wide, like you would make pasta in.

Cook the first half of the ribs in the boiling water for about 5 minutes. Remove and place on a rimmed baking sheet with the meat side up.

Repeat with the second half.

Bake ribs in the oven for one hour. During the last 20 minutes baste with the barbecue sauce one to two times. In the last 5 minutes (and this is optional) baste the under side of the ribs.

I love the way that the early boiling of the ribs starts the cooking process, helping to ensure ribs that are not dried out.

In summer I actually prefer the meat cooked this way to the braising of slow cooking. It tastes more like grilling.

One-Armed Cooking is a series of recipes that involve minimal time at the stove and work well when parents have babies and toddlers to tend to.