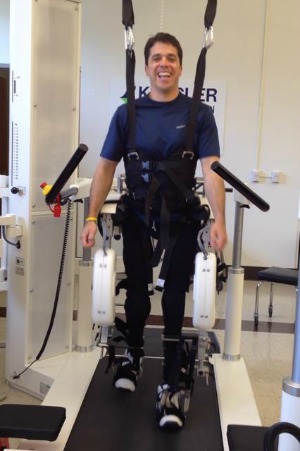 The devices look like something that Tony Stark would have dreamed up for Iron Man: black metal and wires, with a computer chip calling the shots. But where Tony Stark needs his special suits to fly and blow things up, Scott Chesney relies on his to do something much more prosaic. Chesney is just trying to walk again.

Twenty-six years ago, at age 15, the then Verona High School basketball star was paralyzed by a spinal stroke and confined to a wheelchair. Now he is testing a device that may help his body recover some of the motion it once had.

Chesney is going to the Kessler Foundation Research Center in West Orange twice a week to test a robot-assisted rehabilitation device. The machine does some of the things that Kessler’s human therapists have done for him, like helping him stand and moving his legs. But the Swiss-made Lokomat®Pro does things that a human therapist can’t, like providing real-time feedback on how Chesney’s joints and muscles are reacting to the exercise. “We are measuring many different parameters,” says Gail F. Forrest, the Kessler Foundation’s assistant director of human performance and engineering research. “We are looking at changes to bone density. We’re looking at muscle activity and their oxygen consumption. If the machine shows if you are doing less than you should, it will push you.”

Chesney, now a nationally recognized motivational speaker, wants that push. “I have created a comfortable life,” he says, “but I do want to walk again. Absolutely. It would make life easier. My desire to walk to walk again is stronger than ever before. I used to spend all my summers at the Jersey shore, and I miss the freedom of being able to run into the surf.”

The Lokomat and devices like it are based on the premise that patients who have lost some ability to walk due to disease or injury can learn how to walk again, with training and assistance. The machines force patients to repeat movements again and again, while showing them the best way to make those movements. Chesney admits that his 45-minute sessions on the Lokomat have been grueling. “After the first session last Thursday, I felt like I had just finished a basketball practice,” he says. “I was really tired. It was a great feeling, but I felt out of shape.” After Tuesday’s session on the machine, he learned he has two broken bones in his feet, which will cause him to take a break from workouts until they heal. (You can keep up with his progress on his blog.)

Oddly enough, healing was what got Chesney into the Lokomat in the first place. He had seen the machine in Miami in 2003, and had put it on his wish list. But two weeks ago, while he was nursing one of the pressure sores that occasionally develop from being in a wheelchair, he got a call from Kessler: It was testing the Lokomat and his insurance would cover it. Would he be interested? The testing was starting now, which just happened to square with a rare lull in Chesney’s busy schedule.

He doesn’t believe in coincidences. “I believe that as quickly as this entered my body it can leave my body,” Chesney says of his paralysis. “I wouldn’t be surpised if I woke up one morning and had full use of my body. I am in a place where I believe that anything is possible.”