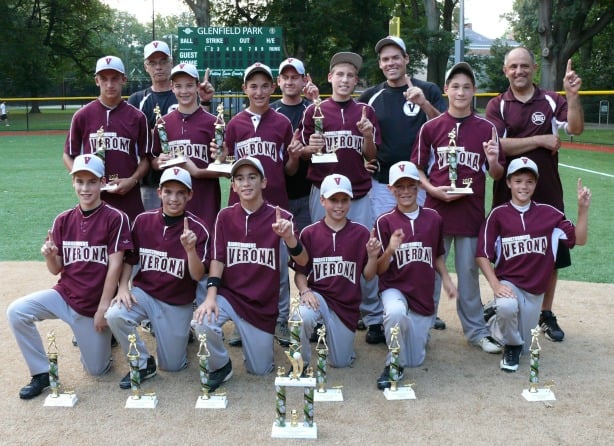 With a large and loud crowd on hand, the Verona 12U summer Barnstormer baseball team played the championship game of the Suburban-Essex-Morris-Passaic Baseball League on Friday. Verona was the # 1 seed and stood at 12-0 coming into the game. Cedar Grove was the # 2 seed and was 11-1 coming into the game. It was a rematch of an earlier battle between the two top teams in the summer league and its two arch-rivals.

The game was exciting and tense for the entire seven innings. It was a pitcher’s dual through the first six innings at 0-0. Both teams made exceptional defensive plays and both teams had outstanding pitching. Ian Metzger pitched four near perfect and scoreless innings, and then handed the ball over to C.J. Lavery, who pitched the final three innings.

Cedar Grove scored what appeared to be the winning run in the top of the 7th to take a 1-0 lead. The game entered the bottom of the 7th with Verona’s back to the wall and the possibility of losing an undefeated season and league championship to arch-rival Cedar Grove.

In the bottom of the 7th, David Festa came up to face one of Cedar Grove’s hardest throwing pitchers. Festa hit an 0-1 pitch 250 feet–well over the 215-foot center field wall–for a home run and a tie game. The next batter was Lavery, who hit a 2-1 pitch high and deep to the right field corner. It was so high and deep that all that was in question was whether it was fair or foul. When the umpire signaled “fair ball” the stands and the bench erupted and Verona had a walk-off league championship victory with back-to-back home runs in the bottom of the last inning.

This Verona Barnstormer team has now competed in its fourth straight league championship game and has now won three championships since their first season together in 9U.