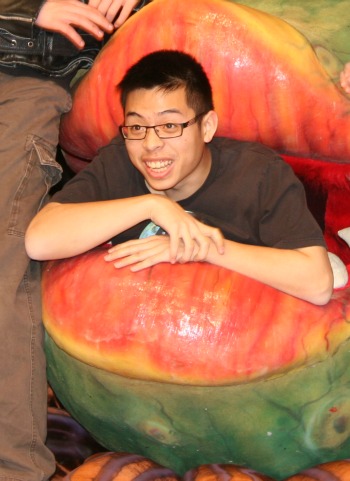 Netflix, the Internet movie service, has 26 million subscribers worldwide. Just a few days ago, the CEO of Netflix announced that these subscribers had watched a total of 1 billion hours of video in just one month, June. Much of that content now is from second-run movies and old TV shows, but Netflix is putting a growing pile of money into original content. It recently outbid HBO to commit $100 million to 26 episodes of one show, Weeds.

Video content is everywhere these days, from TV and movies, to music videos, video games and video ads. It’s on our televisions, in our movie theaters, but also on our computers, tablets and cell phones. We are entertained by video–and taught by it. Clearly, somebody is going to have to make a lot of video content in the future. Somebody like Evan Yee.

Yee, a member of the Verona High School Class of 2012, is headed to film school at Emerson College this fall, with a plan to write or direct movies in the future. He’s not the only one: Eric Kaptein is going to the USC School of Cinematic Arts, Megan Burnham will be at the California Institute of the Arts, which has majors in film, video, stage design and costuming, and digital media. Last year, several members of the class of 2011 went to art schools that had strong connections to the world of video and Ryan Denora went to the Pratt Institute, which has degrees in animation, film and video, and digital media.

Pretty impressive when you stop to consider that there are no film classes at Verona High School, though there is an after-school film club and a broadcast journalism class. So how did this happen? Call it the YouTube generation phenomenon. Kids who are exposed to hundreds of hours of videos (72 hours of content is uploaded to YouTube every minute) eventually stop to wonder how all that video was created. They start experimenting with whatever camera is around. They start to be inspired.

For Yee, an honors student with a penchant for rock, the tipping point was eighth grade, when he discovered videos by Wong Fu Productions. “To see three Chinese-American kids in college making movies, that was new to me,” says Yee, who is also Chinese-American. (That Yee, above, as the puppeteer inside Audrey II in the VHS production of Little Shop of Horrors.) Wong Fu has done music videos of Maroon 5’s “Sunday Morning” and Jason Mraz’s “I’m Yours”, while amassing more than 189 million views on YouTube of original shows that center on the lives of Chinese-Americans and the stereotypes that surround them.

Yee started experimenting, posting videos to YouTube, going to film camp at the University of California Berkeley and entering contests like the 48 Hour Film Project , which allows would-be Steven Spielbergs just 48 hours and three props to make a movie.

“I put away all my school work that weekend to work flat out on the movie,” Yee recalls. He shoots with a Canon EOS Rebel T1I or T2I camera and edits on Sony’s Vegas Pro. “Hopefully, I’ll get a Mac for college,” he adds.

When it came time to choose a college, Yee started to work through Naviance, the VHS Guidance Department’s college guidance system. But it was a cousin’s recommendation that helped him to find Emerson. And when he looked into the school, he liked what he saw. Emerson is ranked 18 on on the Hollywood Reporter’s list of the 25 Best Film Schools worldwide, and it is the alma mater of Jay Leno and Denis Leary, the creator of Rescue Me,  the FX channel series about New York City firefighters after 9/11.

Ten years from now, Yee sees himself clearly on the set of a movie–unless of course he’s in a very successful band. For the past two years, Yee has fronted Leo’s Arrow at the Verona PBA’s Cops & Rockers teen band competition. But the pull to create a different image of his culture is strong. “Growing up, there weren’t many Asian roll models,” says Yee. “I want to change that. I want to make movies to inspire people.”

Here’s a movie Yee did for Film Club: