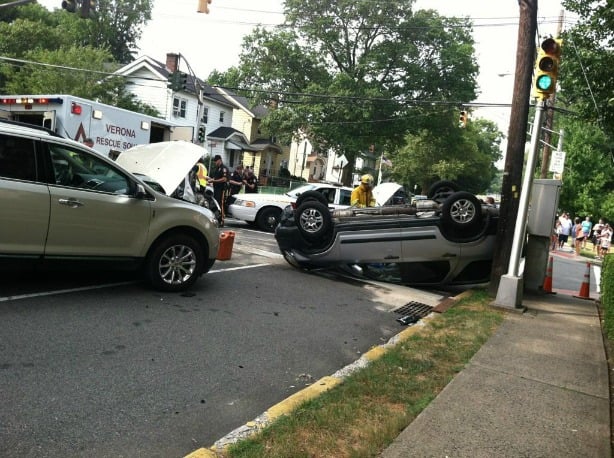 A three-car collision at the corner of Grove and Linden avenues late this afternoon ended with one of the cars upside down against the utility poll.

According to Verona police, a Toyota Corolla occupied by a couple from Fairlawn was traveling south on Grove and went through a red signal at Linden at about 4:30 p.m. It was struck on the passenger side by a driver from Verona who was traveling west on Linden. The  impact spun the Corolla into a third vehicle, a Lincoln SUV, which was driven by a couple from Little Ferry. It also caused the car from Verona, a Honda CRV, to overturn and come to rest upside down against the utility pole.

The Verona driver was transported to University Hospital, suffering from what the police characterized as bumps and bruises, and a hand injury. The other four people refused medical attention. None of the drivers was immediately identified by police, but a summons was issued by Officer Dave Wardrope to the driver of the Corolla.

The VPD praised the quick response from the Verona Rescue Squad and Fire Department and said that statements from two witnesses assisted with the investigation.