Summer Reading: We Need To Talk About Kevin 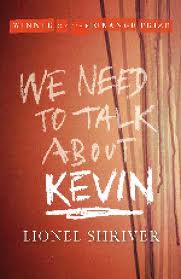 As far as summer reading goes, this book is not fluff, or the easy read. Far from it in fact, and I was incredibly addicted to reading it. If you’re looking to be transported to another world while reading, this story will do it, but it’s a world all too real and possible for any parent. That said, I think it’s a book every mother should read.

We Need to Talk About Kevin honestly addresses the struggles parents face when very smart children have learned to read us, defy us and ultimately play us. The main character, Eva, describes her life, her suspicions, and even her fear of her own son all through brutally honest letters to her estranged husband, Franklin. As she goes through this cathartic process, her closest and most daunting look is at herself and what her own role may have been in creating the person her defiant baby grew up to be.

The book was published in 2003 and its author, Lionel Shriver, won a top literary prize in England for it in 2005. Shriver–a woman who changed her first name–has said in interviews that the book’s success, and eventual rise to the bestseller list, was based solely on word of mouth. But even before it was that popular, there were early plans for a screenplay and a movie, which was released in 2011. Here is the trailer: