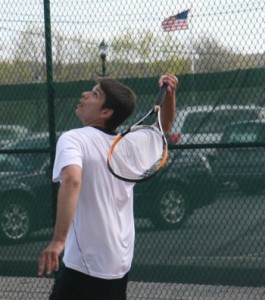 It was a strong season for the 277 boys and girls who participated on spring sports teams at Verona High School. There were honors for Verona athletes on and off the field, including a North 1 Group 1 championship for the boys tennis team. The team finished with a 16-8 record overall and was 10-2 in conference. Coach Pat Schoenig was named Essex County Boys Tennis Coach of the Year.

The baseball team made it to the second round of the state tournament after defeating Sussex Tech in game one. The golf team achieved a 16-3 overall record–putting them in second place–and was 13-2 in the division. The girls track team finished third in the state section.

There were 65 conference, county and state honors awarded to VHS students, including first team All-Conference to Caroline Chivily in softball; Tim Kiernan and Nick Looney in baseball; Dwight Tucci in lacrosse; Frank Ferrari and Bobby Leblein in golf; Matt Tuorto (pictured right), Jake Miller, Steven McMickle and Alejandro Diaz in tennis; and Kelsey Attamante, Kaitlin Egan, Kate Percevault and Heather Sweeney. Percevault also placed first in North 1 Group 1 for discus, while Sweeney took first in the 1600 and qualified for the Meet of Champions. Julieanne Mascera of the girls’ lacrosse team was named to the state’s top-scoring list for that sport. She scored 99 goals this season with high school career total of 270.

Sweeney, the valedictorian for the Class of 2012, was named a NJSIAA scholar-athlete, one of fourVerona students honored for academic achievements. She will be attending MIT. Colleen Carr and Phil Vetrano were named Essex County scholar-athletes. Carr is headed to Seton Hall University, while Vetrano will be going to Georgia Tech. Mascera was named to the Academic All-American Team and will be attending Fairfield University on a lacrosse scholarship.