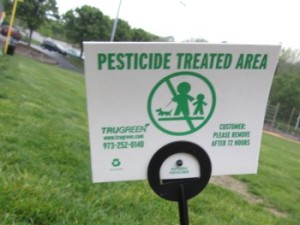 Last week, the Montclair Town Council passed a resolution in favor of a state law that would ban chemical pesticides on public playing fields.

New Jersey Senate Bill S 1143 (Assembly Bill A 2412) is also known as the “Safe Playing Fields Act”. If approved, it would prohibit the use of synthetic lawn care pesticides at child care centers, any school with elementary or middle school children and public park playgrounds, except when there is an immediate threat to human health. But the Montclair resolution went one step further, and recommended that its high school also follow Safe Fields practices and use organic field maintenance. Supporters of the Safe Fields bill note that many scientific studies have found a link between synthetic pesticides and health problems in children, including cancer and asthma.

Last month, it was discovered that synthetic chemicals had been used on the Linn Drive field in Verona before an elementary school soccer league practice. Since then, Verona Town Council members have been looking into the township’s field care practices. Under state law, Verona’s public schools must care for their fields without synthetic chemicals, under a practice called integrated pest management. But the town, which was managing the Linn Drive field, also manages the school fields for the Board of Education. It is not yet known to what extent the town’s contractor, TruGreen, used synthetic pesticides on school fields.

Montclair did not ban pesticide use throughout town, which is what several other cities around the U.S. have done. And the Montclair Town Council resolution won’t, by itself, be enough to make the Safe Fields act a reality. The bills have been stuck  in legislative limbo since 2010.

The Verona Town Council will hold a meeting on pesticide use on playing fields in July.