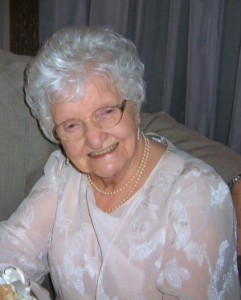 Mae was born in Orange on March 14, 1919, to the late John Francis Riordan and Johanna Fitzpatrick Riordan. She was raised in North Arlington, attended Our Lady Queen of Peace Grammar and High School and was a member of its first graduating class in 1937.

She began her career in health services in Florida but then joined the banking community at National Newark and Essex Bank in New Jersey as an investment advisor, while also working for the Bloomfield Bake Shop and Shirley Shops. She later worked with American Savings and Loan in Bloomfield, as well as First Jersey National Bank in Jersey City, Kearny and Harrison. Finishing her career, she worked in the treasurer’s office in the town of Harrison for three years.

After retiring in 1980, she settled in Verona, and then Caldwell. She was the mother of Francis L. DeVoe, Joseph A. DeVoe and the late Robert J. DeVoe. She is also survived by her sister Margaret C. Sabatino, 10 grandchildren and 9 great-grandchildren.