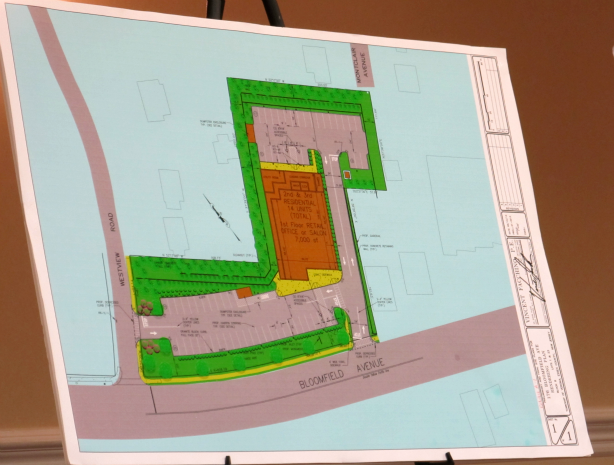 Verona’s Board of Adjustment met for 3 1/2 hours last night on the proposed commercial and residential development at 176 and 200 Bloomfield Avenue and at least one thing is clear — there will be more meetings on this project.

About 30 residents attended the meeting, most from Westview Road and Montclair Avenue, the residential streets that border the project. Though some of them did get the opportunity to ask questions near the session’s end, many left in frustration because most of the evening was devoted to testimony from the architect and site engineer for DMH2 LLC, as developer Dennis Handel’s company is known.

The Board of Adjustment’s role is to hear applications for variances to Verona’s zoning ordinance and DMHZ’s plans to build 7,000 square feet of commercial space topped by 14 two-bedroom apartments required five variances.  One would allow the developer to have so-called personal services businesses (think legal, medical, financial) among the tenants and not just retail. A second variance is needed because the proposed usage is 70% residential and 30% commercial and Verona’s zoning ordinance specifies an even distribution between the principal uses.

DMH2 also needs variances for making the site’s street front parking lot only 20 feet from Bloomfield Avenue instead of the required 30 and for for street front signage, and the height of the substantial retaining walls that will be needed to carry out the project, which will turn the current steep slope of the property into a more level lot. Verona code now allows walls as high as six feet. But one terraced wall at the west side of the proposed project would be 26 feet at its highest. (The building, shown in brown above, tucks into that wall and DMH2 said it would be largely invisible from the west.)

Board members had many questions about the permissibility and engineering of the walls. Building inspector Tom Jacobsen said that town engineering consultant Hatch, Mott, MacDonald would be on site during the construction of the walls to assure their appropriateness. Hatch Mott’s fees will be paid from an escrow fund set up by the developer and not the town.

But a question by board member Michael Zichelli showed just how massive an undertaking the Bloomfield Avenue project is likely to be. He asked DMH2‘s engineer, Vincent Facchino, how much would have to be excavated from the properties and was told about 30,000 cubic yards, or about 1,700 truckloads. Facchino  said that the excavation could take four to five  months. “We have to do it slowly because of the residents in the area,” he added. Trucks involved in the excavation and construction would be able to enter and exit the property only from Bloomfield Avenue and not Westview, which is a one-way street that borders Everett Field.

That seemed only a small comfort to the residents in attendance, several of whom, including Montclair Avenue resident Jon Warner, expressed concern over the blasting that would be needed to pry the rocks loose. DMH2promised to bring a blasting consultant to the next meeting, which is scheduled for Thursday, July 12.  The actual blasting work is governed by state regulations and would be supervised by state engineers, not Verona officials.

There did appear to be the prospect of one concession to residents: DMH2seemed open to considering alternatives to having an entrance and exit to the development from the bottom of Westview Road. But that could hinge on  a review of the plan by the Essex County Planning Board, since Bloomfield Avenue is a county road, and on whether it is possible to move the bus stop now located at the corner of Westview and Bloomfield.

The July 12 meeting will again be held in the ballroom of the Verona Community Center beginning at 8 p.m. The meeting will begin with more testimony from DMH2 witnesses before being opened to questions and comments from the public.

NOTE: A previous version of this story rendered the name of the developer as DMHZ. It is DMH2.