He came to Verona High School for a part-time, temporary job in September 1972. He stayed for 40 years. Now Joel Throne is getting ready to retire, and he hopes that he has achieved what his  first VHS mentors told him he should. ” John Burguillos and George Stiefbold both told me, when you go someplace, you always leave it better than you found it.”

Throne leaves VHS with a long resume of work, in and out of the classroom. He taught social studies and history, and coached many of the sports at VHS, from baseball and girls basketball to football and even wrestling. “There was a period when I coaching three seasons,” he recalls.

But for many people Throne is synonymous with business education at VHS, from basic business and marketing classes to his beloved competition club DECA. The goal of the Distributive Education Clubs Of America is to prepare students to be business leaders and entrepreneurs; Throne’s personal goal is to make them academic leaders as well. This year’s DECA president, Filip Babalievsky, went all the way to nationals and came in first in his written exam. He’s headed to Yale University in the fall. “We’ve had tremendous success with DECA,” says Throne, who still has on his answering machine a congratulatory message left some years back by Joe Pirrello, a former VHS principal who authorized the start of DECA, despite reservations. “I could never have done it if Joe had not blazed the trail,” says Throne.

And yet, business was in his blood. Throne’s family owned an ice cream company, and he started riding with his dad on deliveries to Verona when he was just six years old. And there is often a local cast to his business lessons. When a recent class was trying to understand the decisions that municipal governments make in economic development, Throne told his students why Verona has no fast-food businesses now: In 1984, Verona  teenager Danny O’Callaghan was killed at a White Castle here.

Throne seems to marvel that his career unfolded as it did. He was one of 30 candidates for the full-time social studies job in 1972, fresh from being drafted into the Army. The Army had yanked him out of law school–it could do things like that back then–and Throne made a deal with his wife: If he didn’t like teaching, she would let him go back to law school. Now, the bargain is going to be different. “I have already informed my wife that I am not going to be volunteered for grandpa duties,” says the grandfather of five, who promptly rattles off all the outings that he has gone on with his grandchildren lately.

Throne, who stays in touch with many former students through the business world’s latest marketing tool, Facebook, isn’t the only one who will be leaving Verona’s public schools this year. Among the other retirees are Constance Petner frome the Gifted & Talented program, elementary school vocal teacher Jean Hughes, H.B. Whitehorne French and Spanish teacher Ruth Taberna and secretary Toni Onorato, Carole Gelfand from special education, speech and language therapist Christine Passero, Justine Cantrell, the librarian at F.N. Brown and Brookdale, and Joe Cerretta, a custodian at Forest.

Yet Throne is adamant that he is not retiring. He’s going to continue to work with DECA outside the school (VHS Principal Glenn Cesa says the school is still searching for a replacement in school) and he’ll continue to sell real estate. He might get back into baseball coaching and maybe, just maybe start his own business. “I’m still going to get up at 5:30 a.m.,” he says.

“It has been a very pleasurable 40 years,” says Throne. “I don’t live in Verona, but in a way I have never not lived in Verona. The kids here are very special.” 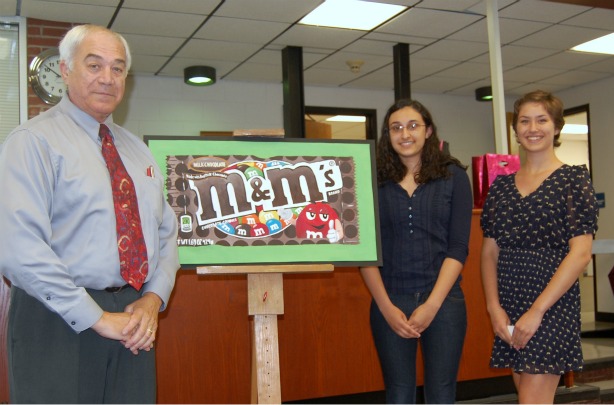 Adara Blaney and Hannah Dayan presented Throne with a Pop Art painting by Blaney that will hang in the VHS Student Art Gallery.