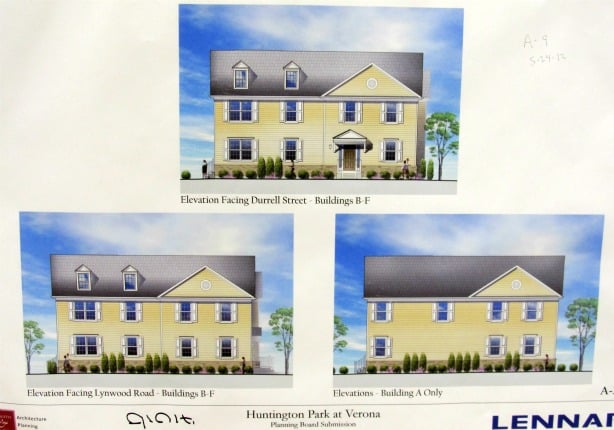 The developer of the townhouse complex planned for the former Charles Bahr & Son lumber yard presented architects’ drawings for the  site at the Planning Board meeting this past Thursday.

Lennar, a national home-building company, intends to set six buildings perpendicular to Durrell Street with street-front facades (shown above) that its architect said would mimic the existing single-family homes on the street. The design will be a new concept for Lennar, which is calling the development Huntington Park at Verona.

The six buildings will contain 33 attached townhouses. Each would have two bedrooms and a total of 2,600 square feet of  interior space. The basement of the units is being billed as a “bonus” room, and it has been designed without a bathroom or egress windows so as to not be usable as a third bedroom. Verona officials have stressed that, with just two bedrooms, the units are unlikely to appeal to families with school-age children. Nevertheless, Township Engineer Jim Helb said that the meeting that there could be deed restrictions on the site that would limit owners to two bedrooms.

Lennar’s architect said the units would meet the Energy Star III standard, and that the roofs could carry solar panels, although those would have to be added later by the development’s homeowners’ association.

The Planning Board also heard testimony from a Lennar witness about environmental issues at the site, which was a coal yard in its early years of operation. The board was told that coal residue on the site was within acceptable limits and would not affect groundwater or indoor air quality. Lennar said it would be following established procedures from the Department of Environmental Protection for site remediation and would be monitoring air quality daily during construction. Lennar also said there was an underground oil tank on the property and that a soil test of the area around it was clean. Bahr operated its oil delivery business from a smaller lot across the street, which is not part of the townhouse development.

The Planning Board will hear more testimony on the Lennar development at its June meeting, which is tentatively set for June 28.