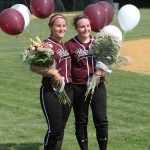 As the high school baseball season hits the final week, Verona notched two victories on Tuesday with a double-header sweep in Belleville.

The Hillbillies, in one of their best offensive games of the spring, pounded out 17 hits in the opening game on their way to an 18-3 triumph. It was a good day for senior starters as third baseman Kris Jones picked up three hits and seven RBI, and center fielder Eric Kaptein also provided three hits, including a home run. Senior center fielder Nick Looney had two hits and three RBI, while senior shortstop Tim Kiernan had two hits in the victory.

In the nightcap, junior Jonathan Tosh tossed a four-hit shutout as Verona edged the Buccaneers, 1-0. The Hillbillies managed just three hits in the second contest and scored the winning run after Kiernan reached on a base-on-balls and stole second and third bases. He scored on a throwing error as Verona executed the first-and-third, double-steal play.

Verona stands at 14-9 on the season and plays a Super Essex Conference division game at 4 p.m. today at Caldwell High School.