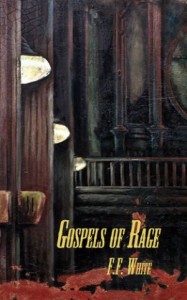 Twice a year, we are asked to remember soldiers. In November, all of those who served and, in May, those who never made it back from battle. It can be a difficult task because too often, these soldiers were not well known to the general population–before or after their service.

Forest F. White, a relative newcomer to Verona, has just published a book of poetry to capture the experiences of outsiders like soldiers and proceeds from the sales of the book, Gospels of Rage, will go to a program to help rehabilitate soldiers through art.

White, a native of California, served in the U.S. Army, though he was not deployed overseas. The book reflects his experiences and those of other people, soldiers and not, living and dead.  “It is an outlet for expression, not pro-war or anti-war,” says White, though he concedes that some veterans, particularly those who served in Vietnam, are sour about their experiences.  They, more than any other group, chose to be  silent about their experiences in war, fearful of the stigma that was attached to the Vietnam conflict.  And that silence can cause them to be lost.

Here is how one of his poems expressed that:

” … The horrors I’ve beheld
refuse to remain forgotten,
so I pursue a sullen end
to this sour road I’m on
that I foolishly took for you,
mothers and sisters, countrymen.
Now, you don’t need to understand,
it simply must be done.
For me, unlike some, liberty
is more than just a word.
It warrants anonymity,
terror, and every grim reward…”

White will read from Gospels of Rage at the Newark Public Library on Saturday, June 9 at 2 p.m. in the fourth floor auditorium, fourth floor. While the reading is free, sales of the book will will benefit the Combat Paper Project, which serves veterans from many different conflicts. In the Project’s workshops, which are held nationwide, uniforms worn in combat are cut up and turned into paper pulp, which then becomes the base for art projects by the veterans. Several retired servicemen and  women will also present their poetry that day, including David Keefe of Montclair, a Marine Corps veteran who is the coordinator of Combat Paper New Jersey.