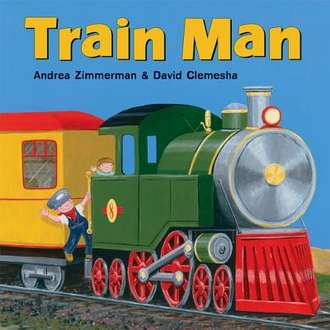 Boys love trains. Whether they are being built and played with on the floor or are the main part of a story, there is just something about them that has kept my own boys busy for hours. Among brothers, one of the greatest things to watch is an older brother passing on his love of trains, and all that they can do, to a younger brother. Among my own boys, some of their favorites have been: The Little Engine That Could, Chugga Chugga, Choo Choo and All Aboard the Dinotrain.

This week’s picture book selection from Cheryl Ashley, the children’s librarian at the Verona Public Library, captures that love of trains shared between brothers.

Written and Illustrated by: Andrea Zimmerman and David Clemsha

Suitable for: Toddlers to kindergarten

Opening from the book: “I love trains.  My brother is too little to say ‘Choo-Choo’, but I know he likes trains, too.”

Brief synopsis:  An adorable little boy loves trains and wants to be a “train man” when he is older.  We see him conducting a bright green, red and yellow locomotive, wearing his “train man” hat, blowing the whistle, while holding his baby brother as the train chugs all the up into the mountains.  He plans to teach his brother all about trains when he’s a bit older and in the meantime, shares his toy trains with him.

Why Cheryl chose this book:  The little boy’s love for his little brother is sweet.  Trains are always a very popular subject with the preschool set and the sparse text and bright, bold illustrations keep the youngest of pre-readers absorbed.