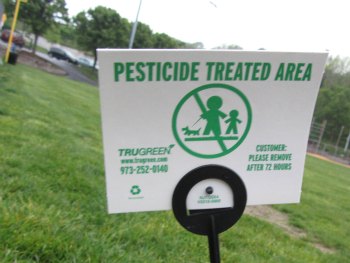 Pesticides were used on Verona’s Linn Drive playing fields earlier this month, and the Verona Town Council would like to know why.

On Tuesday, May 8, elementary school student Nina Machnowski went to play soccer on the Linn Drive field and noticed the presence of pesticide flags. Nina’s mom is Gloria Machnowski, a member of Verona’s Environmental Commission (full disclosure: so am I) and Nina is very aware of environmental issues. She informed her coach that her parents do not allow her to play on pesticide-treated fields. Since the field flag did not identify which pesticides had been used, her father, Stephen Machnowski, called TruGreen, the contractor that had done the work.

The company told him it used Anderson 19-0-5 Fertilizer with 0.28% Dimension Turf Herbicide and Nufarm Specialty Products Escalade® 2. The safety sheet on Escalade notes that it can aggravate asthma, emphysema and bronchitis. The active herbicide in Dimension is Dithiopyr, which warns in its safety sheet that repeated overexposure could affect kidneys, liver, blood, and the adrenal glands, and cause thyroid damage.  Dimension contains 2,4-Dichlorophenoxyacetic acid, which is the world’s most widely used herbicide. Studies on it have been mixed, with some implicating it as a cause of cancer in humans and others not.

What Councilman Bob Manley and other members of the Town Council wanted to know at Monday’s meeting is why these chemicals were used at all on a playing field used by children. “We are aware of what happened and we take it very seriously,” said Manley. “The health and safety of our children is paramount.”

Pesticides are substances that kill pests, whether those are bugs like mosquitoes and ticks, or plant pests like weeds and algae. They can be made from laboratory chemicals or natural materials. Some have been found to be highly toxic, others not. The U.S. Environmental Protection Agency evaluates pesticides and, as the agency notes, since pesticides “are designed to kill or otherwise adversely affect living organisms, pesticides may pose some risk to humans, animals, or the environment.”

Pesticides are not, however, the only way to control pests. Integrated pest management, which existed well before chemical pesticides, emphasizes monitoring pests and acting selectively when they pose an active threat. IPM practitioners use pesticides only as a last resort and generally use those made from natural substances. Research has shown IPM to be safe and effective.

IPM is the policy at Verona’s school fields. A 2002 state law mandated IPM on all school property and page 577 of the Verona Board of Education’s policy handbook states that:

“Non-pesticide pest management methods are to be used whenever possible. The choice of using a pesticide shall be based on a review of all other available options and a determination that these options are not effective or not reasonable. When it is determined that a pesticide must be used, low impact pesticides and methods are preferred and shall be considered for use first.

Linn Drive, however, is a community field and Verona township code (section 123-9) appears to regulate pesticides only in their usage at “major developments” where storm water runoff might damage groundwater, perhaps because Verona gets its water from wells.

But here’s where things get sticky: The town and the BOE often share management of the school fields, and Superintendent Steven A. Forte referred questions about school field management to Joe Martin, the town manager. Martin told the Town Council on Monday that, “We are paying for organic treatment except where there are weeds.”

Martin assured the Council that, “We meet or exceed all state requirements” where pesticide use in concerned. He noted that the town has sent one employee, Gary Grasso, to a pesticide training school so that the town might better supervise contractor work. It is not known whether Grasso was present when TruGreen did its work at Linn Drive.  That work apparently finished by 8 a.m., which would have left the fields with the required seven hours of drying time before the soccer program began at 3:15 p.m. However the work was done on a day of misting rain. Landscaping professionals generally try to avoid applying pesticides on windy or rainy days so that the chemicals don’t migrate to other areas.

Asked about this, a TruGreen spokeswoman said that, “According to our records, the May 8, 2012 treatment of the Verona township athletic field occurred at 7:30 a.m. and there were no adverse weather conditions noted. On that date, TruGreen applied the same, EPA-approved products that it has been applying since 2010 at township request.” The spokeswoman also noted that, “…we work closely with the New Jersey School Integrated Pest Management (IPM) Program to ensure the products and procedures we use receive an additional layer of risk-based scrutiny.”

Some New Jersey legislators are working to put even more distance between children and pesticides. The Senate and Assembly have been gathering support for the so-called Safe Playing Fields Act (S1143 / A2412), which block the use of lawn care pesticides at schools, child care centers and recreational fields except where there is “an immediate threat to human health.” You can learn more about the Act here.

While Council members praised Martin for generally acting in ways to avoid risks to town residents, they asked that he take additional steps to make sure that Verona’s playing fields are safe. The Council asked Martin to contact Rutgers University, which has a strong reputation for expertise in turf management, for an independent assessment of Verona’s field care. Martin agreed to the request.

Nina Machnowski addressed the Council at its May 21 meeting.

If you have questions about pesticides, see the EPA’s Web site.