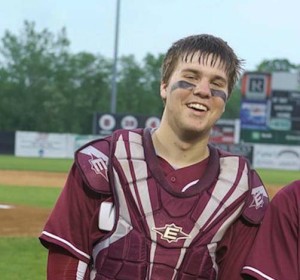 When you watch a Verona High School baseball game from the stands, you see a variety of emotions on the field. There’s satisfaction at a well-placed hit, pride when an opponent is tagged out, joy when a game is one. The players on the field see them too, but with a perspective that only those in the stands with a telephoto lens might capture.

But there’s one expression of emotion that remains largely hidden to spectators and players alike: The broad smile behind the catcher’s mask that senior Chris Ohlweiler wears.

That smile is consistent, as has been Ohlweiler’s play this season. He has been in every inning of every game, except when he had a minor concussion early in the season. And he has been as much a force at the plate as behind it. Ohlweiler had two hits when Verona and Cedar Grove finally squared off at Yogi Berra stadium last week, and has gotten hits off Newark Academy, Nutley, Bloomfield Tech, MKA  and others.

Ohlweiler is respected for his positive attitude and work ethic, which he also displayed on VHS’ basketball and soccer teams for many years. He plans to attend Centenary College in the fall.