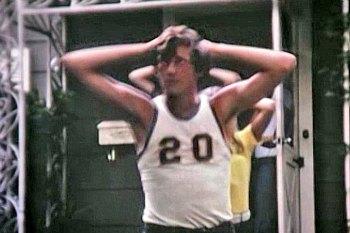 1972: The Viet Nam war is raging. The Godfather (with several Verona residents among the extras) hits the movie theaters. The Boston Marathon lets women compete for the first time. Five men, acting under orders from President Richard M. Nixon, break into the Democratic National Committee headquarters in the Watergate apartment complex. Atari releases a video game, but it can only be played in arcades. A handful of geeks in California have computers that communicate with each other.

And Verona High School was different, very different. Just ask Roger Chiocchi. He’s got the senior movie to prove it. “It was funny for the time,” says Chiocchi. Like the scene in which the teachers serve students at a “bar” set up where the VHS Media Center is now. “They would never let us do that today,” Chiocchi concedes.

The VHS Class of 1972 is getting ready to celebrate its 40th reunion and the movie they created so many decades ago can once again be seen by the world. It was shot on film (ask your parents, kids) and when it was shown at the class’ 10-year reunion it fell apart in the projector (ask your parents, kids). Chiocchi put the remnants away in the attic at his mother’s house and there they stayed, for 30 years, until he was cleaning the house out a few months ago.

“It seemed to be in pretty good shape,” he recalls of the film when he found it. “I got it digitized so I could re-edit it on the computer.” Chiocchi has worked for ad agencies on and off Madison Avenue, so he had developed video editing skills that he didn’t have in high school. “One day I stopped at VHS, and  I shot some footage with my smart phone, which might be better quality than the original film,” he quips. And he re-mixed the original movie into a format that is helping to bring the class back together for its big reunion.

The movie has had to be broken into several parts to fit on YouTube. That’s Part I above. You can also catch Part II, Part III or Part IV, or watch the Trailerand call it a day. Some parts are not on YouTube because they contain music from a singer who has gotten just a little bit more famous since 1972, Bruce Springsteen.  Jim Battista, Suzanne Leone, and Marcia Herman Patrisso are the organizers of the 40th reunion so if you’re not already going, look them up on Facebook for details.

Summer Sundays aren't so sweltering at Holy Spirit any more. Thanks to some new technology and one of...