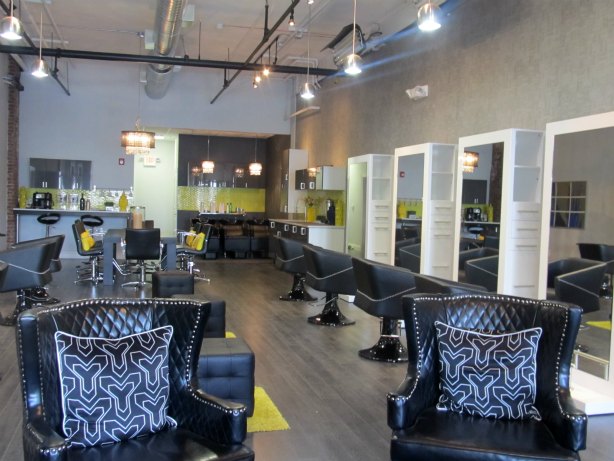 For months, it has been the worst-kept secret in Verona: Anthony Lombardi, the star of Jerseylicious, was not moving his Anthony Robert Salon out of Verona.

Yes, the script of the reality TV show would have had you believe that Lombardi, who has operated from a tiny space next to the Peckman River for several years, was going into business with the family of Filippo Giove somewhere on the Hudson waterfront. But no, my friends, no. Lombardi has taken a spacious spot in the same shopping plaza as 7-11 and the world of Verona salons may never be the same.

It is bigger, and better. The old place had just four styling chairs. The new salon–designed by Lombardi himself with an assist from Jerseylicious set designer DeJon Gee–has eight chairs for cuts and another eight spots at a communal coloring table. The look is not too feminine and not too masculine, a mix of IKEA cabinetry, furnishings from Wayfair, and Lombardi’s personal sense of humor: There’s a photo in back of Elvis cutting a fellow band member’s hair.

Lombardi sees the new salon as a networking spot, and not just because there’s full WiFi.  He’s planning to offer beauty and hair care workshops, and a regular “Blowout Lounge”. “Come here, get a blow out and make-up, and then go out and you look fabulous,” he says. (Don’t worry, guys, there will be stuff for you, too.) There’s a big-screen TV on the wall and every station is mobile, which means that the industrial-chic space–once a rug store and warehouse–can get a new look as easily as the clientele.

The new space will have many familiar faces: Jeff Greenfield, Kristin Okaly and Maria Lomuscio have all made the move up Bloomfield Avenue.  But there will also be five new staffers, including Nicole Obert, the former creative director of the Arrojo Studio in SoHo and runner-up in season two of another reality hair show, Shear Genius. Lombardi has a new partner as well: Peter Orcinoli, who has been an educator for DePasquale Salon Systems and a brand manager for GKHair.

What about his Jerseylicious co-stars? If you’ve watched all four seasons of the show, you know that there have been ups and downs with Olivia Blois Sharp, Tracy DiMarco, Gigi Liscio and the rest of the cast. Lombardi dismisses the drama. “They have the opportunity to work here,” he says. “And we will be doing things together.”

The new salon is located at 279 Bloomfield Avenue next to the Verona PostNet franchise. It will be open Tuesday to Saturday just like the old place, though Lombardi may be open Sunday afternoon and later on certain evenings. He’ll let you know once he catches his breath.

“It was always my intent to stay in Verona,” says Lombardi. “I just needed to find the right spot.”