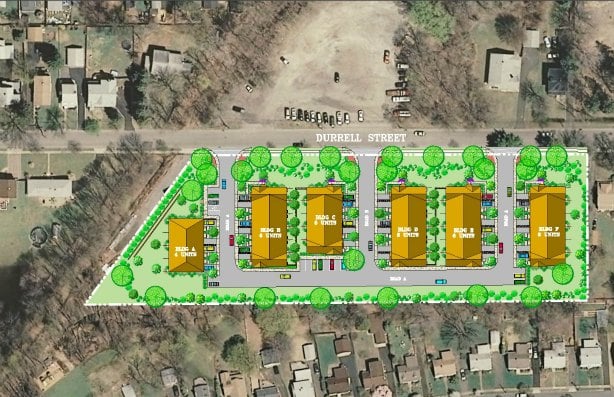 The Verona Planning Board met for nearly four hours on Thursday night to hear plans for a townhouse complex on the site of the former Charles Bahr & Son lumber yard on Durrell Street.

Lennar, a national home-building company, intends to fill the 3.6-acre property with 33 attached townhouses spread across six buildings. Each unit in the property, dubbed Huntington Park at Verona, would feature two bedrooms and would be sold as condominiums.

The meeting, which was held at the Verona Community Center, was by turns contentious and conciliatory. It opened with a lengthy challenge by Michael S. Rubin, a lawyer who is representing several Durrell Street property owners in a lawsuit against the townhouse plan.

Rubin, who helped Sunset Avenue residents block an expansion by the Children’s Institute, stopped a March 22 Planning Board hearing on the Bahr property by arguing that the plan required variances from Verona’s Zoning Board. Lennar re-worked its plan for the April 26 meeting so that it is now a conforming use, but Rubin tried to assert that the Planning Board did not have jurisdiction to hear it. After more than an hour of debate, the board voted that it did have jurisdiction and opened the presentation to Lennar attorney Michael Lavigne and Eric Keller of Omland Engineering Associates, which is Lennar’s consulting engineer on the project.

Keller sought to convince the board that Lennar’s plan would represent a significant improvement to the lot by improving drainage and adding grass, shrubs and trees. Keller asserted that because of the structures and hard-packed surface at the lumber yard more than 90% of the site is now impervious, which means that rain and snow can’t pass through to the ground below. The landscaping of the proposed development would slash the percentage of impervious cover to 51.5%. Runoff from the site would also be controlled by rooftop drains that would feed into an underground drainage system and by drainage swales along its south side. Keller noted that the roof of one building currently on the Bahr property now pitches storm water directly into backyards on Lynwood Road and that the townhouses would be set back more than 30 feet from Lynwood yards. (This PDF shows how the plan would change the Bahr lot; it is a large file and loads slowly. The photo above was taken from the file.)

Planning Board Chairman Fred Sambataro appeared to concede the improvements. “It’s better than it is now, but is it as good as it could get?”

He got assurances to that effect from Verona Township Engineer Jim Helb, who also seemed to help Lennar assert that townhouses would be better than the single-family homes favored by some Durrell residents. Lennar presented a sketch to the board (not shown to the audience) of a 13-house development that would place several homes closer to property lines than the proposed townhouses and which could add more children to the F.N. Brown elementary school.

When the meeting was finally opened to public questions at 11 p.m., Durrell resident Maureen Toth asked how long the area might be disrupted by construction. Keller said completion would depend on the pace of sales. Retired Verona Police Captain Fred DiStefano, who lives on Lynwood, asked how snow removal would be handled on the property and how rodents would be contained during construction, and received assurances on both.

Before the meeting closed, Sambataro sought to hire some experts to help the Planning Board evaluate several aspects of the Lennar proposal. He got approval for environmental and stormwater assessments, but fellow board members turned back his request for a real estate appraiser to give an opinion on the development’s effect on property values.

The meeting’s allotted time ran out before Lennar could finish its presentation. It will be back before the board on May 24.