Jazz And More At VHS 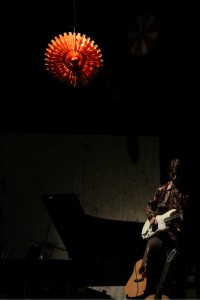 If you’re a high school jazz band and you want a challenge, you might take on one iconic song in the course of a concert. But that’s not how we do things in Verona.

Last Wednesday night, Verona Jazz & Beyond performed “Wichita Lineman” as a tribute to Glen Campbell, the country music star who will be forever associated with the tune. Campbell has Alzheimer’s and he is currently on what he acknowledges will be his final tour. Max Morden, who directs the jazz band created an orchestration for his group, replacing the original string part with a rich line for VHS senior and cellist Tim Hatcher. Michael Hardenberg, last seen on stage at VHS as Seymour in “Little Shop of Horrors“, brought the audience to its feet with his vocals.

The band then proceeded to rip through the Temptations’ anthem “Get Ready” and “Mustang Sally”–with Isaac Rubins channelling Wilson Picket–before wrapping the official part of the program with “Stairway to Heaven”. Steve Rust, Frances Metzger, Amanda Morden and Jillian Lanese traded their saxes and flutes for recorders for the opening, while Hardenberg and Kelsey Mitchell delivered the vocals.

That might have been program enough, but it came after a strong first half that rolled from jazz to rock to Latin. The Latin numbers showed that percussion section–Wes Ostrander, Dom Gagliano, Giancarlo Cordasco and Skyler Fortgang–could hold their own in any night club in San Juan. And speaking of Latin, trumpeters Rubins, Dany Molloy, Chris Sweeney and Dan Smillie stepped up to the mic for Tito Puente’s “Oye Como Va” and killed the high notes in their solos.

And then, of course, there was the senior send-off, “Rock And Roll All Nite”. A big KISS good-bye from a group of very talented musicians who have entertained us all for the last four years: Rubins, Gagliano, Ostrander, Hatcher, Kellie Ackerson, Nick Licitra, Mike Basil and Erin Smythe.