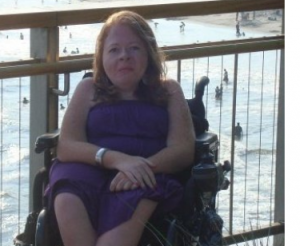 Kristen Dunleavy is a 29-year-old teacher. That might make her sound like a lot of Verona residents except for this: Dunleavy has spinal muscular atrophy. She relies on a motorized wheelchair to get around the West Orange school in which she teaches, and an aged, unreliable handicapped-adapted minivan to get there. Dunleavy is now hoping that, with a bit of community support, she can win a new van.

As part of National Mobility Awareness Month, the National Mobility Equipment Dealers Association is running a contest that could help Dunleavy win a new van. All you have to do is click on this link, use promo code 797, and vote for her.

That’s it. Easy, right? Definitely not as much work as Dunleavy has put in to get her career going. According to her sisters Caitlin and Colleen, who nominated her to win a van, Dunleavy began driving the minivan 10 years ago to go to school at The College of New Jersey. She earned a bachelors degree in special education in 2004 and a masters in counseling two years later. She currently works as a special education teacher in West Orange.

“A new van would make it possible for Kristen to continue to independently get to work on time, attend her students’ events after school, keep her social life abuzz, and give her the opportunity to pursue all her crazy dreams (just like the rest of us)!”, her sisters wrote on the nomination page.

The contest began in mid-March and runs through May 13. As of Sunday night, Dunleavy had more than 4,300 votes already. That might sound like a lot, but there are more than 1,000 people who are trying to win one of the three vans being given away. You can vote once a day, for as many days as you like between now and when the contest ends.