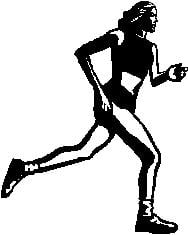 On Friday, April 13, the Verona High School girls track and field team had an outstanding showing at the Aviator Relays in Hasbrouck Heights. The team finished third with 56 points, behind Ramsey (77 points) and host team Hasbrouck Heights, which won the meet with 78 points. Twenty teams competed at the relays.

Heather Sweeney received the baton in third place in the 4x1600m relay and made up 150m to give Verona a first place with a 5:28 individual performance and a team time of 23:35. In addition to Sweeney, the team included Melanie Egan,Amanda Flores and Jillian Sprong.

About two hours later, the exact same scenario played out when Sweeney received the baton in third place and again finished first in the 4x800M relay with a 2:28 run and team time of 10:15. This time, her teammates were Egan, Kelsey Attamante and Sarah Conboy.

The VHS pole-vault team–Attamante, Gabriela Mercurio and Samantha Intili–tied for first with Hasbrouck Heights with a team total of 24’6″.

Both hurdle teams had outstanding performances with first and second place finishes. The shuttle high hurdle team of Erin Smythe, Colleen Carr, Marybeth Grund and Laura Williams were first-place winners in one of the most thrilling races of the night. The 3x400MH team of Smythe, Grund and Conboy finished second with a time of 3:35.

The discus team of Kate Percevault , Sonali Vaishnav and Christina Carlucci had a third place finish with a team throw of 242′. Percevault had a great throw of 108′, which came only a few days after she broke the school record with a throw of 111’7″.

In a very competitive long-jump match-upVerona got a fifth place finish while breaking the school three-person long jump record with a team jump of 47′ 7 1/4″. The team includes Williams, Colleen Farrell, and Jordan Seubert. Williams had an outstanding jump of 16′ 7 1/4″.

The night ended with a sixth-place finish at javelin, with Carlucci, Alison Sprong and Kaitlyn Egan throwing a combined 244′.

The girls track team will be back in action on Thursday, April 19, against both Newark Central and Shabazz high schools, on the track at H.B. Whitehorne, beginning at 4 p.m.