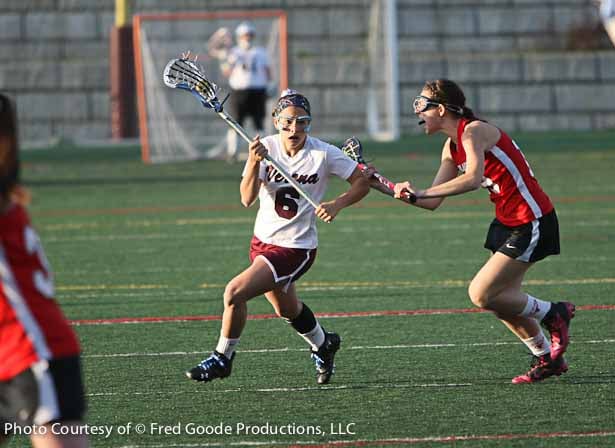 Senior Melanie McClellan made nine saves in goal for the Hillbillies girls’ lacrosse team as they picked up their third win of the season 18-6 over Governor Livingston High School on Friday at Centennial Field. Julieanne Mascera led all scorers with seven goals and two assists. Casie Milmoe and Lauren Ednie had three goals apiece, and Jackie Brozyna netted two. Also scoring for the Hillbillies were Lauren Smith, Lizzie Scandiffio and Julia Frazee. Next up for the 3-2 Hillbillies is a Monday 4 p.m. match at Montclair High School.

The Verona boys’ lacrosse team also played Governor Livingston on Friday, but to much less success. Senior Brian Marion had two goals, while Dwight Tucci, Mike Perri and Ethan Garsman each had one. Senior Jake Facey had six saves in goal. The 12-5 loss dropped they boys’ record to 2-1. They take on Bernards High School in a 7 p.m. game at Centennial Field on Tuesday.

In baseball, Luke Sniatkowski tossed a one-hitter and struck out seven against Queen of Peace High School on Saturday at Doc Goeltz Field as the Hillbillies captured their second win in as many days. With two outs in the bottom of the first, Luke Weiss put Verona out in front for good when he hit a two-run double. Hot-hitting senior outfielder Nick Looney knocked in Weiss with his first of two hits of the game to go ahead 3-0. Chris Jones, Eric Kaptein, Sniatkowski and Ryan Flood all had base hits in the effort. Queen of Peace was able to get on the board late in the game when a hard shot to the infield took a bad bounce, setting up an errant throw on an already difficult play. Verona rebounded in the bottom of the fifth inning, pulling ahead 12-2 for their fourth win of the season.

In Friday action, Dean DeNicola pitched the Hillbillies to a 9-3 victory over Newark East Side. Looney hit his second home run of the season, Jones tripled and Captain Tim Kiernan went 2-4 with 2 RBIs. Sophomore PJ Lombardi has been filling in as catcher behind the plate for the past few games for the injured senior Chris Ohweiler, who expected to return this week.