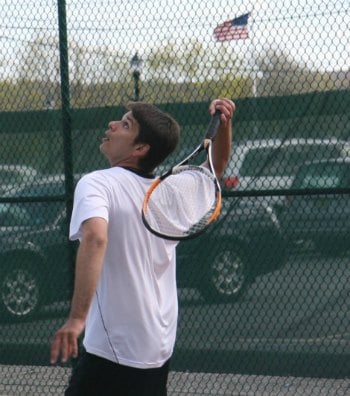 Tennis is most often thought of as an individual sport. One player, one opponent, one match, one spotlight. But it is possible to be a team player while standing out as an individual and that is why Matt Tuorto of the Verona High School boys tennis team has been chosen as this week’s Verona Sports Boosters Senior Athlete of the Week.

Tuorto has been a varsity tennis player for all four years at VHS, but he wasn’t always first singles. He spent two years playing first doubles, building his strength, agility, strokes and speed before stepping up to second singles last year behind then-senior Paul Corrente. He had a 16-7 record last season, which was the best individual record on the team. This season, Tuorto has won all four of his match-ups, all but one in straight sets. In his most recent outing against West Essex High School, Tuorto defeated David Shields 6-3, 6-0.

But Tuorto, who also played basketball for the Hillbillies over the winter, has been a team player on many community service projects at VHS, like the phone cards for those in the military and the Nike Reuse-A-Shoe Campaign. A regular on the honor roll, Tuorto has also been involved with VHS’ Peer Leadership program.