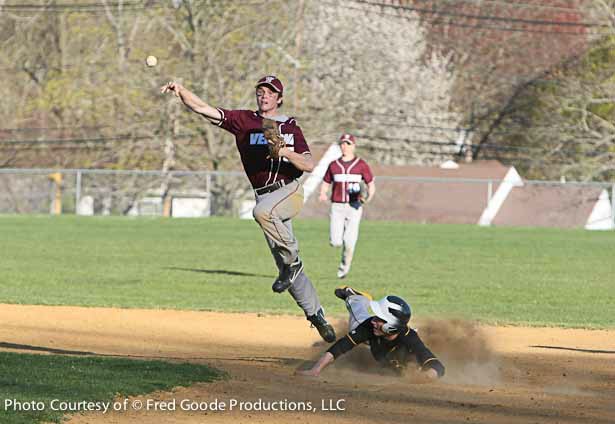 In an exciting match-up against Cedar Grove on Wednesday, the Hillbillies captured a 6-2 win against their rival.

Tim Kiernan’s first-inning home run put Verona up 1-0. In the top of the second, Cedar Grove scored on a single and triple to even it up at one. Verona let a huge opportunity slip away in the bottom of the inning when outfielder Luke Sniatkowski led off with a single, and Dean DeNicola and Nick Looney walked. With men in scoring position and nobody out, Cedar Grove struck out the side.

In the third, DeNicola led off with a triple and was brought home on a perfectly executed suicide squeeze bunt by senior Chris Ohlweiler, giving Verona a 2-1 lead. The Grove tied it up in the top of the fifth, but with two out Kiernan doubled and was knocked home by Luke Weiss’ single. Starting pitcher Jonathan Tosh made it into the sixth inning when he was replaced by sophomore Max Vasile who was making his varsity debut. With bases loaded and one out, Vasile got the Panthers to ground into a double play to end the threat.

In the bottom of the sixth Ohlweiler walked, Chris Jones had a single and the Panthers misplayed Eric Kaptein’s line shot to right field. Matthew Rubin’s sacrifice fly put Verona on top 4-2 before Weiss knocked in two more runs to take a 6-2 lead.

Things got uncomfortable for the Hillbillies in the seventh when the Panthers loaded the bases on a hit batsman, a hit and an error. In baseball those are the ingredients for trouble. But Vasile was able to get a strikeout before once again forcing the Panthers to ground through a Kiernan-to-Rubins-to-Weiss game-ending double play. With the win, the Hillbillies are 2-0 on the season.

In tennis, senior Matt Tuorto defeated Nutley High School’s Drago Stemate in straight sets 6-1, 6-0 as he lead the Hillbillies to their third straight victory in as many days. Alejandro Diaz and Josh Solomon also won their singles matches. In first doubles, Matt Brehne/Torsten Kolind defeated Nutley’s Charlie Bingham/Steve Del Grande 6-1, 4-6, 6-1. With Verona’s 5-0 win the boys moved their record to 3-0 on the season.

Julieanne Mascera’s four goals and two assists weren’t enough to help the girl’s lacrosse overcome a tough Caldwell High School team as the Hillbillies dropped their second straight, 17-11. Mascera along with Julia Frazee combined for seven goals. Jackie Brozyna, Lauren Ednie, Shannon Curran and Casie Milmoe also scored in the effort. Lizzie Scandiffio had an assist and Melanie McClellan had eight saves in the net. The girls’ lacrosse team record stands at 1-2 on the season.