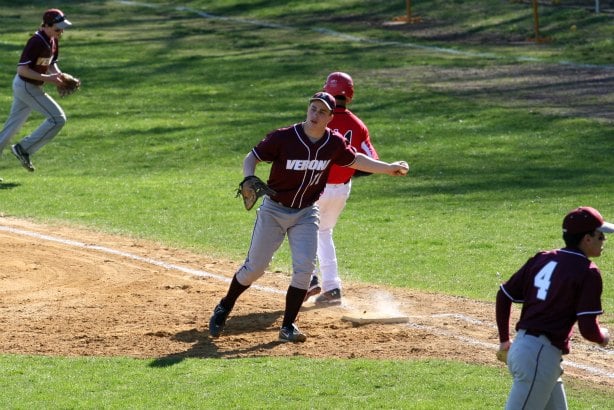 The Verona Hillbillies baseball team won their season opener with 7-3 victory over Glen Ridge High School yesterday at Verona’s Doc Goeltz Field. Verona jumped out to an early 5-1 lead but Glen Ridge threatened in the 6th when they struck for two runs.

In the bottom of the sixth, senior catcher Chris Ohlweiler walked and then left fielder Nick Looney belted a two-run homer to the right center gap that helped pad the ‘billies lead. Glen Ridge threatened again in the seventh with a man on second but junior right-hander Dean DeNicola turned and picked the runner off to end the game. DeNicola went the distance on the mound to pick up his varsity victory.

The Verona girls’ softball team improved their record to 2-0 with an extra-inning victory against Sussex Tech. The teams were knotted at 1-1 heading into the eighth inning but the ‘billies scored 4 runs in the top of the frame to pull ahead 5-1. Tech came back with 2 runs in the bottom of the eighth but came up short. Natalie Wertz, Courtney Paganelli, Sarah Frawley, Ellen DiDia and Caroline Chivily all had two each. Wertz a sophomore led the team with two RBIs. Paige Ferrell went the distance on the mound for Verona, giving up six hits and three earned runs. She also knocked out a triple in the effort.

The boy’s tennis team defeated Kinnelon 4-1 to move their record to 2-0 on the season. Senior Matt Tuorto and Alejandro Diaz won their singles matches. The double teams of Matt Brehne/Torsten Kolind and Jake Miller/Steven McMickle were victors in their matches.

There’s a busy home slate today for the Hillbillies as the baseball team takes on Cedar Grove, girls’ lacrosse plays Caldwell at Centennial and the tennis team plays Nutley.

Previous articleGet A Break From Library Fines
Next articleSenior Athlete Of The Week: Colleen Carr