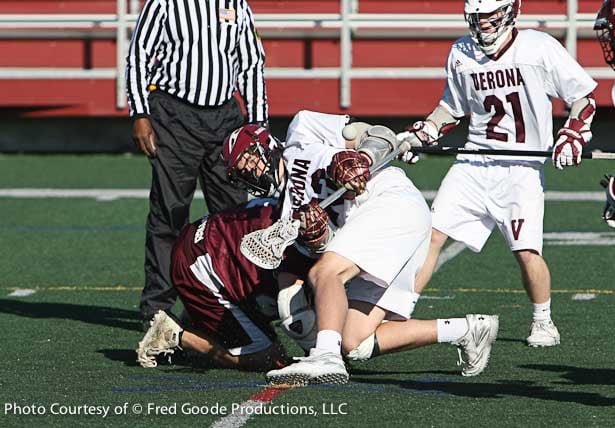 It was victories all around for Verona teams on Monday as the spring sports season started in earnest.

The Verona Hillbillies boy’s lacrosse team won their opening game against the Clifton Mustangs 8-2 yesterday at Centennial Field. Verona led 3-0 at halftime before adding five second-half tallies. Michael Theobold and Brian Marion had three goals each, while Michael Perri and Ethan Garsman chipped in with one. Harry Kroessler and Garsman each had an assist. Senior goalie Jake Facey had seven saves in the net for Verona.

The Verona girl’s lacrosse team exploded for 18 goals on their way to their first victory of the young season over Mo-Beard. Fairfield University-bound senior Julieanne Mascera dominated the game with an impressive seven goals and three assists. Senior Shannon Curran had three goals. Julie Frazee, sophomore Cassie Milmoe and freshman Jackie Brozyna netted two apiece. Sophomore Lauren Ednie had a goal, junior Ellen Aracil had a goal and an assist, and Maggie Dougherty had an assist for the Hillbillies. Melanie McClellan had 10 saves in goal. With the 18-9 victory, the Hillbilly girls evened their record at 1-1.

In softball, Caitlin Barnes pitched Verona to an opening day win with a five-hitter against Glen Ridge High School. Jenna Atmeh went 2-3 with a stolen base and two runs scored. Ellen DiDia went 1-3 with a walk and a run scored. Glen Ridge’s run came off the bat of pitcher Tara Kelly’s sixth-inning home run.

In Tuesday action, the baseball team has its opener against Glen Ridge at home at 4 p.m., and then takes on Cedar Grove tomorrow, also at home. The track team has a quad meet at H.B. Whitehorne against Marylawn of the Oranges, Newark Tech and Weequahic. The tennis team takes on Kinnelon at home and the softball team travels up to Sussex Tech. All contests begin at 4 p.m.