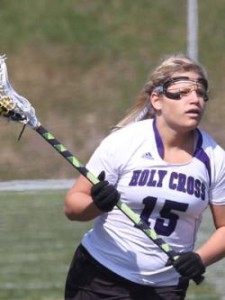 Taylor Zebrowski is a junior at Holy Cross and the women’s lacrosse team attacker recently reached a major milestone:  100 career points.  Zebrowski, a junior, netted three goals in the Crusader’s most recent outing against Navy, giving her 73 goals and 27 assists. She is the 18th player in Holy Cross program history to post 100 points. Zebrowski also now has a team-best six hat-tricks this season and 12 for her career.

While at Verona High School, Zebrowksi played on the varsity lacrosse team all four years and was captain as a senior. She had a school-record 260 career goals, and was ranked in the top 20 in the state in scoring in both her junior and senior years. She earned Under Armour All-America Underclassmen and Academic All-America honors and was named first team All-County twice and first team All-Conference three times.