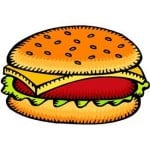 For several weeks now, news reports have been filled with stories of ground beef that included processed beef that had been treated with ammonia. The product’s manufacturer calls it “lean, finely textured beef” (LFTB), but critics dubbed in “pink slime” because of how the meat looks at the end of the manufacturing process.

After an ABC News report on the additive in early March caused consumer outrage, many supermarkets pulled it from the ground beef they sell. In mid-March, the U.S. Department of Agriculture, which supplies ingredients for the National School Lunch Program, said that school lunch programs would be able to buy beef with and without pink slime in the fall.

That left unanswered the question of which school lunch programs used the additive–including ours in Verona. But today’s “Friday Folder” from public schools Superintendent Steve Forte includes a letter from Verona’s vendor, Pomptonian Food Service. The letter, which you can read in full here, says that Verona’s cafeteria food was, and will continue to be, free of pink slime:

“Pomptonian contacted all of our beef suppliers to see if the products we purchase contain LFTB. Again, as it is not required to be on the label, we needed to contact each individual manufacturer and requested letters from them to assure us that this product was not used. We have successfully completed that and have found that the purchased products used in your schools did not, and will continue to not, contain LFTB (pink slime).