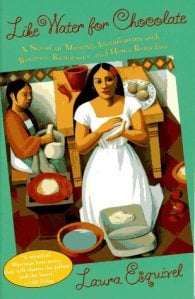 I’ve been wanting to make this soup for 20 years, ever since I first read Like Water for Chocolate, by Laura Esquivel, when it was published in 1992. The book, which was later made into a movie, is Esquivel’s way of capturing her family’s history through recipes and individual stories. It’s an amazing story loaded with culture, magical realism, and of course food.

I re-read it this past February in search of some inspiration for Valentine’s Day.  All of the stories speak to the power of food and how our emotions can pour into what we are making and then be transferred to those who are eating what has been prepared. A concept that is beautifully illustrated with incredible detail throughout the book.

In the end, I did not find inspiration for a Valentine’s meal. We took advantage of the lobster tails that were on sale at Whole Foods and went with a surf-and-turf theme, inspired by my husband’s offer to take care of dinner. But, I was once again taken in by the book’s recipe for, and story behind, Oxtail Soup.

I found oxtails (yes, they are cows’ tails) at Fresh Direct, and in reading through the chapter I was able to piece together the recipe. As I have often found with a recipe that is handed down from one generation to the next, a little bit of interpretation was needed. To take it one step further, I was going to use this in my Crock-Pot, which is most definitely not part of the original recipe. However, the Fresh Direct Web site said that braising was the best way to cook oxtails, so I knew I was on the right track.

After reading one of my favorite books twice, interpreting the story of a chapter into a recipe, and working with a food item I have never before cooked or eaten, I give you Oxtail Soup. In the story it is a cure-all so I did my best to keep it as I envisioned it: rustic, a little spicy, and slowly cooked for hours. As for leaving it to my interpretation, I do hope Ms. Esquivel doesn’t mind.

salt and pepper for seasoning

1 can of diced tomatoes, drained and rinsed

Season oxtails with salt and pepper. 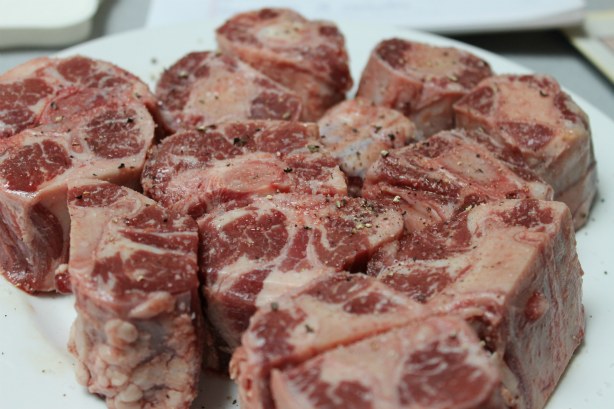 Heat oil in a dutch oven and brown oxtails on both sides (about 5 minutes per side).

Remove meat from pan and place in slow cooker.

Add onion, garlic and potato to dutch oven and saute for about 7-10 minutes, stirring occasionally. 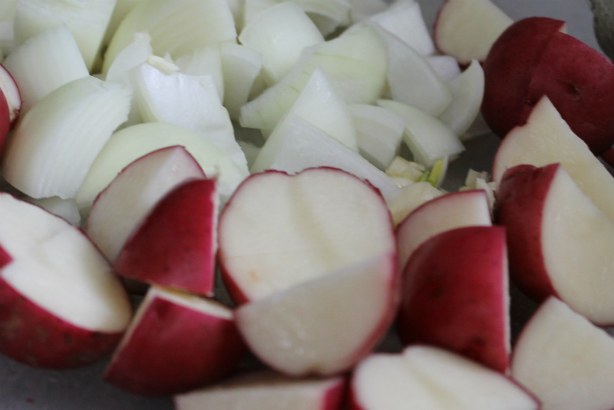 Add red wine to scrape up browned bits. Cook until all liquid has evaporated.

Pour beef broth and water into slow cooker. Cover and cook on high for a total of 6 hours.

During the last hour of cooking add diced tomatoes and string beans. 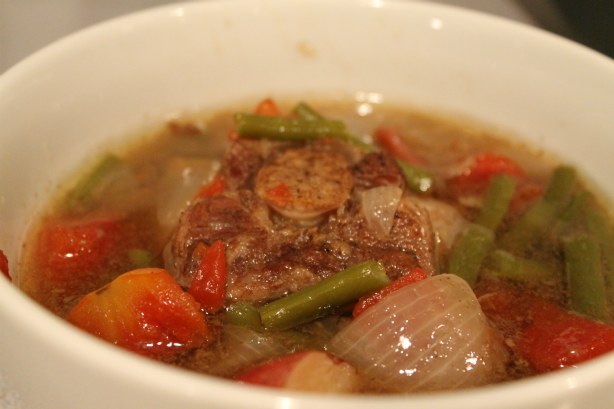 In the book, the original recipe calls for cooking the soup for only 30 minutes. This definitely needed at least 5 hours to cook. The oxtails are very flavorful, but the meat is very tough. Just ask my kids who had trouble removing it after cooking for only 3 hours. It was pretty funny.

The original recipe also calls for fresh tomatoes and chiles moritas, and wine is never mentioned. I took some liberties with the recipe, and the physical purpose of the wine was to loosen the browned bits at the bottom of the pan, but you can use water or broth instead. I didn’t have fresh tomatoes, so I went with diced, and was impatient about researching and finding the chiles. However, my feeling from reading the story was that this is a dish that’s meant to warm both the soul and the body. Spicy foods usually do that, so I went with what was in my pantry.

Grab a bowl: for best results when serving I would suggest removing the meat from the bones before you start to eat. The proportion of meat to bone is almost equal, so these do require a bit more work, and you’ll want a bowl to put the bones in.

I would love to see other Oxtail soup recipes, just for comparison. For me, half the fun of making this was the source of the recipe and my own memories from reading the book.