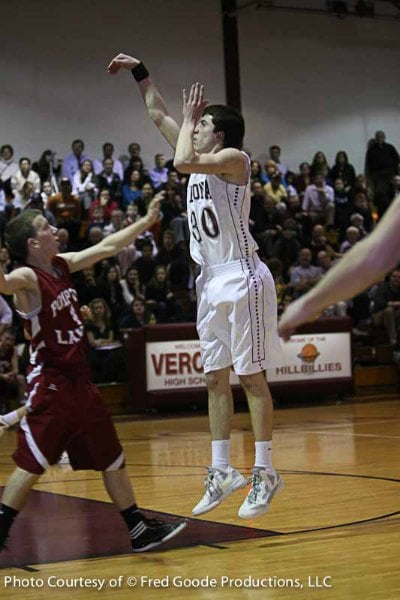 The name on the Verona High School honor rolls reads “Patrick Malanga”, but to his classmates, basketball and soccer teammates, OLL Youth Group friends and his family, he is, and always will be, “Packy”. And Packy Malanga is this week’s Verona Sports Boosters Senior Athlete of the Week.

As co-captain of the 2011-2012 Hillbilly basketball team, Packy had an action-packed cap to his high school basketball career. He finished the season with 147 points and was a key player in Verona’s playoff games. In the first round of the North Jersey, Section 1, Group 1 playoffs, he scored over 15 points and six rebounds, giving Verona a 54-46 win over Pompton Lakes. When Verona rolled over Bogota High School in the next round, Packy Malanga had five points, three blocked shots, three steals and three assists.

He also made his mark last fall on the Hillbilly boys’ soccer team, which made it to the playoffs with a 17-4-1 record. Known for his consistency and leadership in both sports, Malanga was selected to the third team of the All-Group 1 team.

Packy Malanga was recently accepted to The Catholic University of America in Washington, D.C., but he may not head south immeditely. He is currently in Italy researching universities to continue his studies in  gap year there in the fall.

- Advertisement -
Previous articleWorkshop On Drugs, Alcohol In Seniors
Next articleShould You Worry About Your Water Line?