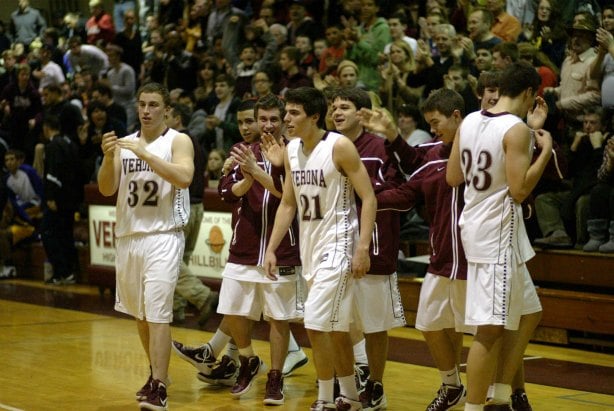 The enormity of his achievment didn’t quite hit Brian Farrell until he stepped off the court and opened up his cell phone. It was packed with texts, tweets and Facebook messages–all congratulating the senior basketball player on hitting 1,000 points. “The phone has been ringing non-stop”, he said.

Just like the gym at Verona High School was ringing with cheers, stomping and applause as Farrell sank basket after basket to become the first Hillbilly in three years to reach 1,000 points. The energy level was so high in Farrell’s favor that it was probably a foregone conclusion that VHS would sweep the playoff game against Bogota High School, which it did, 52-38.

Before the 2011-2012 season started, Farrell says he believed the 1,000-point milestone was within reach, maybe even early in the season. But then he was sidelined by a back injury and missed the first few weeks of games. “When I got hurt I kind of thought I was done,” he said.  “But a few kids on the team picked me up and we made getting to the playoffs a focus.”  Last night’s game was the quarterfinals of the NJSIAA , North Jersey, Section 1 , Group 1 state playoffs, and Farrell knew the magic number was close. “I knew I was in good shape,” he said, “so I was just trying to play my game.”

“Everything works out the way it’s supposed to”, he added.

Farrell said that, as a freshman, he had been inspired by Chris Looney, Verona’s last thousand-pointer, even though he missed the actual game. “I was sick that night and I was begging my mom to let me go to the game. Once I saw it on video, I wanted to experience it for myself.” Which he did in front of a packed house that included his father and uncles, who had all also played basketball for VHS. Farrell hopes to play basketball in college and is being recruited by several Division III schools including  Drew University, the University of Scranton, Ithaca College, Hartwick College and Randolph-Macon University.

In the game, the Hillbillies handily beat the 6th seeded  Bogota Buccaneers. Verona seniors led the way, with Farrell leading all scorers with 17 points. Anthony Huber had 16 and Packy Malanga had 15 tallies.

The ‘billies pulled out in front early by taking a 17-8 first-quarter lead before heading into the locker room at halftime ahead by 11 points, 29-18. Throughout the season the ‘billies have stepped up their game in the second half and continued that trend last night. They added to their lead by scoring 19 third-quarter points while holding off the Buccaneers defensively on the way to their 20th win of the season.

Third-seeded Verona now faces a tough challenge. They travel to Cresskill on Friday to take on the No. 2-seeded Cougars, a game that has a 6 p.m. start. The Cougars have defeated Butler and Leonia so far in the state playoffs to bring their record to 19-3 on the season. The winner of the Verona-Cresskill game will face the winner of a game also scheduled for Friday that pits No. 1-seeded Wood-Ridge against No. 13 Midland Park.