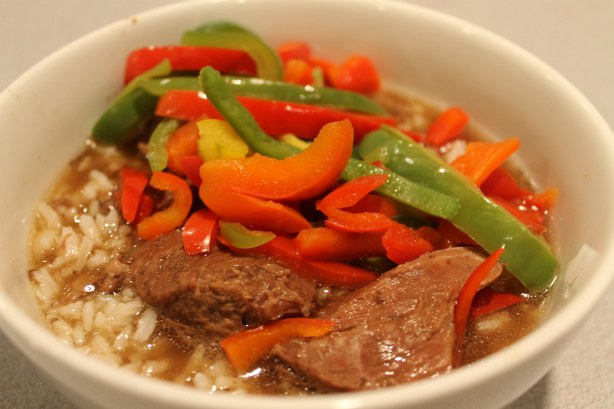 I originally received this recipe during the summer when I was working on the Spice It! Cinnamon series. I had asked around among Verona’s chefs and restaurant owners to see if anyone had recipes using cinnamon they were willing to share. The response was terrific and I had received a wide variety of recipes. There was one recipe however that didn’t make it into the mix at the time, and it was a rendition of what’s below.

The recipe to came to me via Kamilla Liu, owner of Nori restaurant in Montclair, and her mother, who uses cinnamon often in Chinese cooking. I actually wasn’t expecting that, although as I have researched recipes since then, I find cinnamon more and more often in both Chinese and Thai cooking.

This recipe provided an interesting journey for both me and Kamilla. She had received it in Chinese and then translated it into English for me. Some of the wording didn’t make sense to either of us, but as this was her mother’s dish, Kamilla was only able to offer limited instruction. For me, it served as a math lesson and I just have to say that without my Fannie Farmer cookbook (thanks Dad) I really would have been lost. The measurements were metric and needless to say, I don’t speak metric.

I’ve made the recipe twice and allowed for some adjustments in using a Crock-Pot instead of a wok. This was originally meant to be made in a wok, but my wok is unseasoned and sitting in my basement in the same box it was in when I received it as a wedding gift almost 15 years ago. While I’d love to learn how to use my wok, this did not seem like the time to start  experimenting. I had shared all of this with Kamilla and we were both curious to see how the recipe turned out.

I’ll say here that this meal was both relatively easy and while the smells were intense while cooking, the flavors were mild. Translation: My kids ate it and that’s always a plus for me. So, as winter seems to be winding down and spring is peeking it’s head around the corner (I have blooming crocus in my front yard to prove it), try this recipe as it will warm the soul and the senses. Oh, and no further math lessons required.

Heat oil in 10″ skillet or pan

Saute shallot, ginger and garlic until soft, about 5-7  minutes

Add soy sauce, wine and brown sugar. Stir to combine and bring to a simmer.

Cook down for about 3-5 minutes. Add mixture to slow cooker. 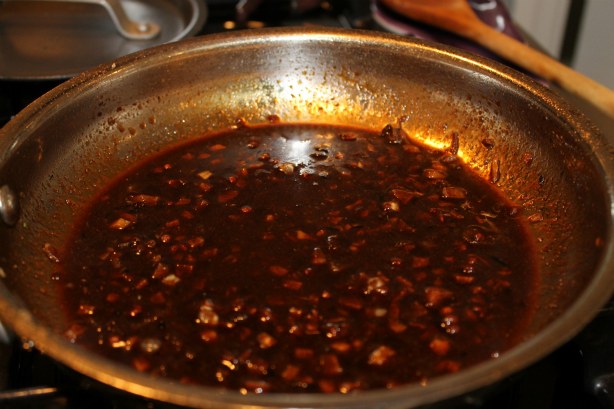 Nestle beef in pot. It should be mostly covered in the liquid. 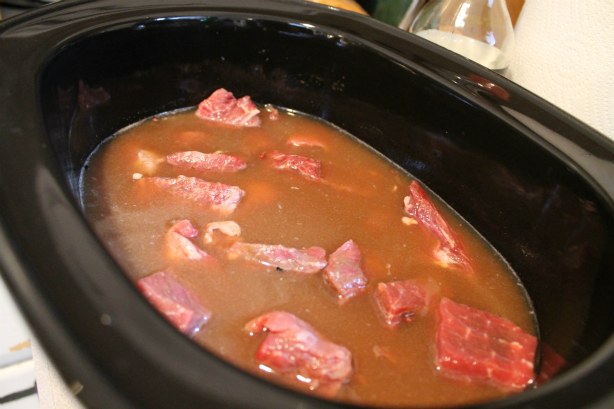 The next morning, remove the ceramic crock from your refrigerator and place in base. Allow to come to room temperature (I did this while making breakfast, coffee, and getting my kids off to school).

Cook on low for 8 hours.

The first time I made this I did not refrigerate overnight- I thought it was some kind of mistake in the translation of the recipe. Then, I came across a recipe for a Thai Pho soup, which did require overnight marinating in the ceramic piece of a slow cooker. So, I’ve made the recipe both with and without overnight refrigeration. Both are delicious, so feel free to omit that step.

As there is a lot of quick cooking over high heat, I would suggest measuring and organizing your spices ahead of time. It’s much easier that way.

Szechuan peppercorns. I had to go to Fairway market in Paramus to find these.  The Chinese call this Prickly Ash and the original recipe called for using the “right amount.” If you like your food spicy, use more than what I suggested and grind or crush the peppercorns first. If you’re feeling adventurous, chew a peppercorn and let me know what you think.

Finally, I served this with lots of the broth over a bowl of rice. I also added (as you can see from the photo) some mixed peppers. I like vegetables with my dinner and these were a good fit. You can add them to the slow cooker just a few minutes before serving, or cook them separately, which is what I did.