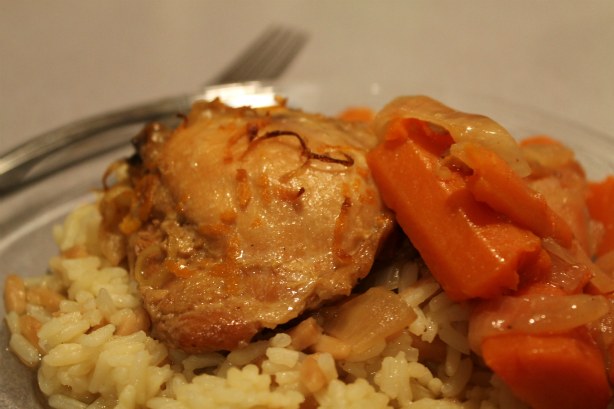 There are a couple of things I know about myself. One is that I often run out of time for making dinner. So if I don’t plan ahead, I’m toast and my kids are having hot dogs. The second is that I love citrus. Not just to eat, but also to smell. Winter is known for citrus fruits and aside from being good for you, they are also quite versatile for cooking. Growing up, broiled grapefruit was a common snack in my house after playing in the snow and now, as an adult, macerated fruit is a lovely dessert with a little home made whipped cream.
However, citrus fruit involved in a dinner time meal, other than lemon, is not a normal occurrence in my family.  After making this meal and smelling the orange and cinnamon wafting through the house, I think I need to find more ways to incorporate citrus fruits into our winter meals.
This recipe was inspired by a recipe from Fine Cooking involving marinating and roasting chicken. While I like roasting chicken, I really needed something for my Crock Pot. So with a little altering, I ended up with Winter Citrus Chicken.
Slow Cooker Winter Citrus Chicken

1 medium-sized onion, peeled and cut in a rough dice

Season thighs with salt and pepper.

Place olive oil in large pot or dutch oven. Cook thighs, skin side down first, until browned; about 5 minutes per side. Set aside to cool slightly.

Add onion and carrots to pot and sprinkle cinnamon on top. Cook until browned and onions are soft, stirring occasionally. About 10 minutes. 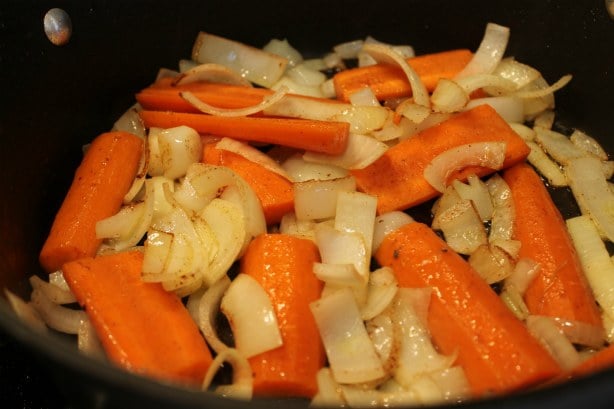 While onion and carrots are browning, remove zest of orange and lemon and place in small bowl.

Then cut orange and lemon in half and juice. Total amount of juice will be about 1/3 cup.

When chicken is cool enough to handle, remove skin.

Place chicken on top of onion and carrots.

Sprinkle zests of lemon and orange over chicken.

Cover and cook on high for 4 hours. 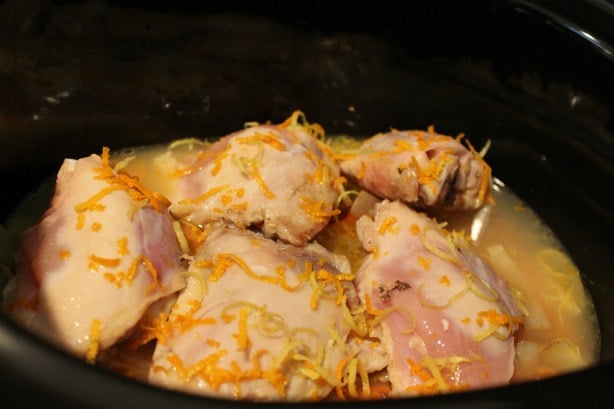 Notes from my experience:
Buy “Cook It! Verona”, MyVeronaNJ.com’s slow-cooker cookbook | Make Your Own Book