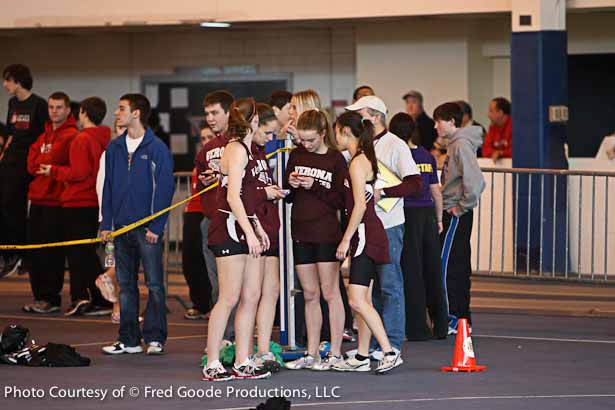 On Wednesday in Toms River, the Verona Girls Track & Field Team won their first Winter State Sectional Championship. The meet was a nail-biter down to the last event, the 4x400M relay. The Verona girls finished with 58 points, just one point more than Westwood High School. The girls’ rally was a fitting cap to a season filled with lots of very hard work.

Freshmen Julia Ashley started off the meet with a second place finish with a time of 1:01.7. Heather Sweeney followed with a 5:27 1600m second place finish. The team’s three hurdlers–Erin Smythe, Marybeth Grund and Laura Williams–were very competitive. Grund and Williams went to the finals, where Williams got fifth place with a 9.69 performance.

Then Ashley ran a blistering 800M to get first place while breaking the former meet record by almost four seconds with a 2:21.76. Ashley also placed fifth in the 55M dash. Sweeney returned to get another second place in the 3200M with a time of 11:47. All three pole-vaulters placed, with Gabriela Mercurio getting third at 8’6″, Samantha Intili getting fourth also at 8’6″ and Kelsey Attamante getting fifth at 8’0″.

That showing was followed by the relay team of Smythe, Attamante, Ashley and Sarah Conboy. The girls had to get at least second place to win, and that’s exactly what they did.

Several members of the Hillbilly team scored personal bests at this meet. Sydney White posted a 2:32 time for the 800M. While Amanda Flores and Melanie Egan finished at 12:40 and 12:41, respectively, for the 3200M. Vinnie Puchik broke a school record on the boys side in the 400M at 54.4.

[nggallery id=190]
Fred Goode took these photos at the counties earlier in the week.