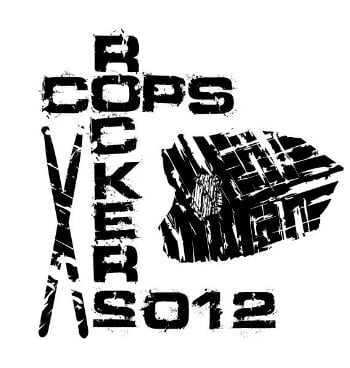 Tonight as in Friday, February 3. Verona High School. Be there or be square. It’s  Cops & Rockers 2012, the teen band competition sponsored by the Verona PBA Local 72.

Bands like Angmar, Feux Johnny, Fusion, Leo’s Arrow, The Loop and Where Eagles Dare from Verona, and NaH from Little Falls (they have cousins in Verona). Take a minute to get to know the bands, and the artist who won the contest to design this year’s logo.

THE ARTIST
VHS senior Tim Hatcher took his first graphic arts class this year, and it turned into him becoming the winning artist for the competition to design the Cops & Rockers logo.  “I started out trying to make something with a skull and crossbones and it looked awful,” he says. The final design evolved from random sketches of instruments–amply critiqued by his friend and fellow senior Kate Percevault.” As Hatcher and the other graphic students finished their work, it was posted to an internal Web site where students could vote anonymously for their favorites. Hatcher’s design advanced, but he didn’t think much of it. And then one day he got called down to the office of VHS Principal Glenn Cesa. “I show up and a police officer is there,” says Hatcher. “They asked me, with straight faces, to sit down,” he recalls. “And then they both started laughing and told me I won the competition. It was priceless.” Hatcher’s design was used on the tickets and posters, and you can buy it on a T-shirt tonight at the show.

ANGMAR
If you were at last year’s show, you remember Angmar, a wild, loud ride of heavy metal and heavy showmanship. If you know your Tolkien, you’ve already guessed that the band’s name comes from Lord of the Rings:  Angmar is the mythical place where the Witch King resides. Though the bands in the Cops & Rockers were only required to perform one original song, all of Angmar’s are its own creations. The titles are “Fallen, Forgotten”, “As Shadows Rise”, and “Tiamat”. When not at Cops & Rockers, band members Conor Lawless, Brian Fong, Tyler Butkovsky and Ryan Cardoza perform anywhere they can, including most recently Champions Bar and Grill in Trenton. You can download the demo of “Fallen, Forgotten” here.

FEUX JOHNNY
“Feux” is a French term used before the name of someone who has passed on. We’re not sure who Johnny was, but Feux Johnny is Giancarlo Cordasco, Alex Campbell and Patrick Cichetti. Inspired by California funk, the band likes to play funk covers like tunes from the Red Hot Chili Peppers.

FUSION
The name is Fusion, as in a melding of musical interests and they were the winners of last year’s Cops & Rockers.  “We were impressed that we won,” says vocalist Austin Williams. “We were the only band that had any freshmen and we were almost entirely freshmen. In addition to Williams, now a sophomore, the band includes Steve Wynen, Andrew Capuano, Nick Celfo and Ryan Yeates.  They are going to be performing an original song “I Want To Be” and covers of “The Anthem”, “Dying in your Arms”, and “Monkey Wrench”. Since winning Cops & Rockers 2011, they have performed at the Presbyterian church in Montclair, Battle of the Bands in Sparta, Our Lady of the Lake’s Kinderfest and some private parties. As a result,  the band is promising an amped-up stage presence this year. “We’ll be doing much more of a performance than a list of songs,” says Yeates. And the band, several of whose members perform in the regular VHS band, has focused on getting their music tight. “All that training from Mr. Lynch comes in handy,” says Williams. (Listen to a song)

LEO’S ARROW
Watching Evan Yee, Mike Bartell, Matt Bartell, Patrick Sullivan and Torsten Kolind on stage, you might not think that, around VHS, they are thought of as quiet guys. The band, which got its name after a flash of cell phone messages about lions, draws its inspiration from groups as diverse as the Red Hot Chili Peppers, Vampire Weekend, Weezer, and even a Japanese band they discovered through YouTube. Their original song is entitle “Home”. “Mike came up with a good guitar line and we decided to build a song around it,” says Yee. They’ll be doing covers of “My Own Worst Enemy”, “Dammit” and “Handlebars”. This is their second Cops & Rockers, and they are gunning for the big prize. “If people haven’t seen us perform, they should,” says Sullivan.

THE LOOP
The Loop loops together musicians from middle school through through college: Theresa Courter, Joey and Nick Fierro, Chris Ehrich and Chris Buneo. The made a splash at Kinderfest last fall after performing at summer parties around town. Their original song is called “Drowning in Reality” and Courter says the lyrics were inspired by her first semester at college. “I was overwhelmed, but it all ends on a good note”, she says. Their covers will be “I Love Rock and Roll”, “The Ocean” (band members are big Led Zeppelin fans) and a rock version Lady Gaga’s “Bad Romance”. Courter, who goes by the stage name Tersa, just recorded a demo at a studio in Montclair. Look for it on iTunes.

NAH
NaH got its name during an 8th grade talent show in their home town of Little Falls. “We were interviewed,” recalls member Ben Shooter, “and upon being asked if we had a band name, one of us replied ‘nah’.” The band’s members all attend Passaic Valley High School, and play in its band and jazz band programs. Their original song tonight is “The Best Of You” and it was inspired by Guns n’ Roses and Saigon Saloon. Their covers are “Monolithic” and “The Time Warp”, from the Rocky Horror Picture Show. Shooter and band members RJ Challice, and Zach Thomas, have played at Waynestock, Hey Jude and The Fine Grind in Little Falls, and the Canvas Clash in Boonton.

WHERE EAGLES DARE
The band’s name? It’s the title of a song by Iron Maiden and The Misfits, and last year, they dared to take their first try at Cops & Rockers last year. Comprised of seniors Isaac Rubins, Dom Gagliano and Mike Basil and sophomore Nick Celfo, the band says that what they learned from that experience is that, says Gagliano, “it’s all about having fun and playing good music.” Their original song is called “Lunch Break”, written by Rubins and a follow up to an instrumental the band wrote last year, “Bathroom Break”. Their covers are “Am I Evil?”, “A Passage to Bangkok” and “No Remorse”.

Seven teen bands will take the stage (two were lost to illness and school commitments). You’ll get to hear them all and vote, by cell phone for your favorite. You can get ready to vote right now by following MyVeronaNJ.com’s Twitter page, where we’ll be broadcasting all the voting. (If you don’t have an unlimited texting plan on your phone, standard message rates will apply.) The doors open at 5 p.m. and the music starts at 6 p.m. Tickets are $10 and will be available at the door.